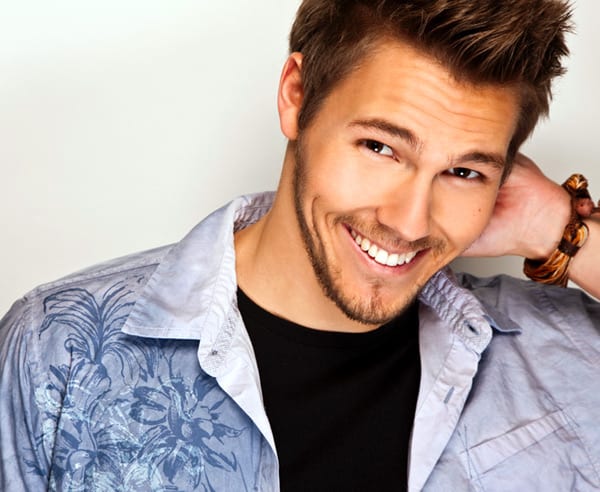 Scott Clifton is “Liam” on “The Bold and The Beautiful.”

by Dana Block
THE BOLD AND THE BEAUTIFUL
Steffy unsuccessfully tried to keep Liam from returning home to Hope. Bill and Katie argued over who was best for Liam — Hope or Steffy. Brooke and Ridge tried to find a creative way to celebrate Eric and Stephanie’s wedding anniversary. Hope and Liam’s night of passion was rather uneventful. Stephanie received a surprise visit from Sally Spectra’s former partner in crime, Gladys Pope. Hope confided in her mom about her disappointing evening with Liam. Hope met with therapist Dr. Stacy Barton to try to get to the root of her problem. Wait to See: Bill goes to great lengths to keep Steffy from signing the annulment papers. Liam makes a startling admission to Bill.

DAYS OF OUR LIVES
Madison stood up to Ian and demanded a divorce. Kate tried to steer Lucas away from Sami. Abigail arranged for her and Melanie to run into Austin and Carrie on vacation. Bo was jumped from behind and beaten into a coma. Hope found out that John was still an ISA agent and begged him to let her help him so that they could hurry home to Salem. Daniel and Jennifer agreed to remain friends. John and Hope came face-to-face with Stefano in Alamainia. Abigail showed up at Austin’s room while Carrie was out. Madison drove Brady away by convincing him that she loved Ian. Billie answered the phone in Bo’s hospital room when Hope called to check on Bo’s condition. Wait to See: Abe feels shut out by his own son. Rafe discovers Nicole’s secret.

GENERAL HOSPITAL
Starr was shocked to see her father, Todd, at her bedside at the hospital. Sonny confronted Carly about her relationship with his nemesis, Johnny. Dante ran a ballistics test on the gun found in Kate’s office. Holly pleaded with Ethan to avoid going after Helena. Carly was furious that she wasn’t allowed to visit Jason. Alexis was actually more concerned with how Carly’s affair with Johnny was going to affect Sonny instead. Lulu accused Delores of stealing the photograph from the evidence room. Steve insisted that Olivia know the truth despite Maggie’s protest. A trial got underway at the courthouse. Wait to See: John McBain strolls into Port Charles. Monica and Tracy get into a quarrel.

THE YOUNG AND THE RESTLESS
Sharon dumped Adam after she found out that he helped Patty escape from the institution, which resulted in Jack’s injuries. Adam tried to assure Sharon that he had changed, but for once Sharon put her kids ahead of her man. Phyllis walked up just as Nick was comforting Sharon with a hug. Avery persuaded Daniel to fight for custody of his daughter, Lucy. Lauren accused Daisy of stalking her. Jack asked Avery to be his attorney in his lawsuit against Genevieve. Devon awoke from his surgery unable to hear anything. Wait to See: Nikki is fed up with Victor’s machinations. Adam faces legal trouble after his role in Patty’s escape.