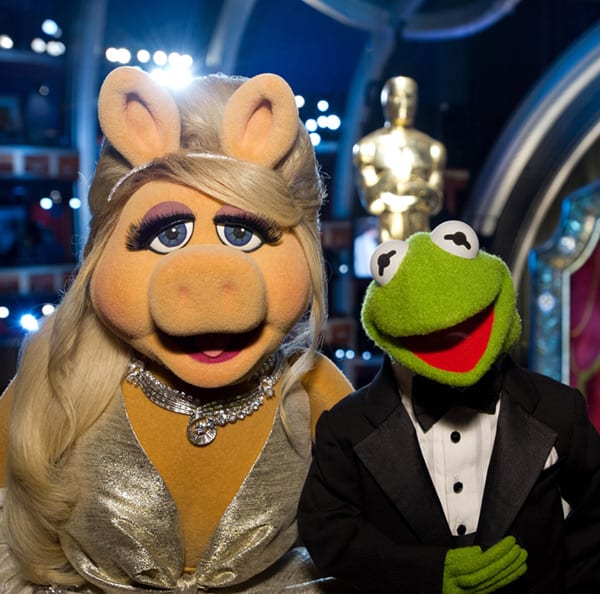 Muppets Miss Piggy and Kermit at the Academy Awards.

PICKS OF THE WEEK
“The Muppets” (PG) — The felt hasn’t faded a bit. The Muppets return with all of their innocence and silliness without coming off as too dated. The story follows Walter, a young, puppet-like fellow, and his friends Gary (Jason Segel) and Mary (Amy Adams) as they go on a journey to reunite the Muppets and save the Muppet Theatre from evil oil tycoons.

A bit of self-referential humor helps blow the dust off the franchise, but the rest of the show is pure new energy. The freshness has even been endorsed by the Academy, as “The Muppets” won the Oscar for best original song. Segel, who helped write the script, is a musically inclined, goofy-grin kind of guy who beams real admiration for the Muppets and fits right in as a human sidekick.

The film stumbles a bit in storytelling, but sells it all on style. If complicated characters and relationships taking a grim look at the demons beneath surface of Swedish society appeal to you, then pick up the book or see the Swedish film adaptation. If a slightly sillier, more veneered version is all you have time for, then this Hollywood take will do fine.

“Tinker Tailor Soldier Spy” (R) — This British spy flick is all about subtlety, paranoia and brain-raking anxiety. Gary Oldman plays George Smiley, a disgraced spy brought back into the agency to ferret out a double agent. It’s dense, dark and darn good for those who can get their teeth into it.

This is as far from 007 as a British espionage thriller can get. Make no mistake, it is a thriller — in its own, gaunt, dimly lit, grey-skies kind of way. The twisted mysteries and intrigue can pay off as much as any chase-scene with a rocket-powered submarine/automobile.

“Carnage” (R) — In a short opening sequence in the park, one kid hits another. When the respective parents meet in a nice Brooklyn apartment to settle things amicably and maturely, things spiral into a collective tantrum by the supposedly put-together couples. Jodie Foster, John C. Riley, Kate Winslet and Christoph Waltz all dig into their roles, but if you’re not pulled in by the forced smiles and underlying hypocrisies, you’ll be put to sleep by this single-setting dark comedy.