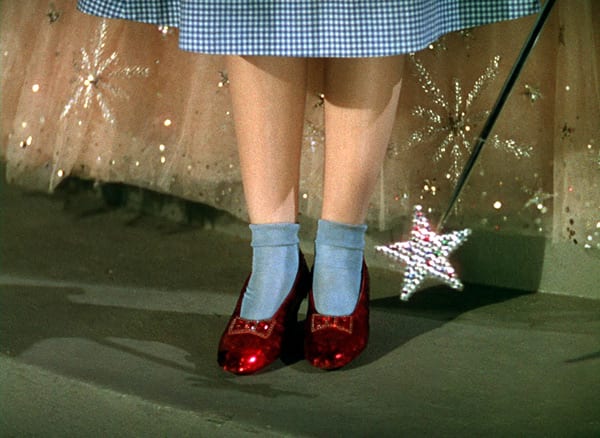 By Tony Rizzo
HOLLYWOOD — The Academy of Motion Picture Arts and Sciences isn’t just about the Oscars anymore. It’s opening an Academy Museum of Motion Pictures at the Los Angeles County Museum of Art. To ensure success, it’s acquired the actual Ruby Slippers that Judy Garland clicked three times in the “The Wizard of Oz.” The Academy wouldn’t reveal what it paid for them, although insiders say it was between $2 million and $3 million. The Ruby Slippers were bought with money from angel investors led by Leonardo DiCaprio, Steven Spielberg and Terry Semel.

It’s believed there originally were seven pairs of Ruby Slippers designed by MGM costumer Gilbert Adrian. The first pair, a prototype called the “Arabian test pair,” were wildly jeweled in an Arabian motif, with curling toes and heels, and used for costume tests. They were sold at Debbie Reynolds’ auction, in December, for $510,000. Six identical pairs were made with 2,300 sequins and a jewel-encrusted, butterfly-shaped red leather bow. Pair No. 1, size 5, were worn by Judy Garland. Pair No. 2, size 6B, were worn by her stand-in, Bobbie Koshay. Pair No. 3 were on the Wicked Witch of the East as she lay beneath Dorothy’s house. They were later used to click Dorothy’s heels three times. Pair No. 4 was a back-up for Judy Garland’s pair.

Pair No. 1 were donated, anonymously, to the Smithsonian Institute in l979. They’re currently on loan to the National Museum of American History for an “American Stories” exhibit, opening April 5. In their absence, the Scarecrow’s hat is filling the void. Pair No. 2 were won by Roberta Bauman in 1940, as second prize in a “name the 10 best films of l939” contest. In l988, her pair was sold at auction at Christie’s to Anthony Landini for $165,000, In 2000, those shoes were sold to memorabilia collector David Elkouby for $666,000.

Pair No. 3, “the witch’s pair,” were bought at Christie’s a few days later by Philip Samuels, also for $165,000. This is the pair now owned by The Academy. Pair No. 4 was sold to collector Michael Shaw by MGM costumer Kent Warner. Shaw loaned the Ruby Slippers in 1990 to The Judy Garland Festival in Grand Rapids, Minn., from which they were stolen and never recovered. Shaw received a settlement from a $1 million insurance policy.

Two other pairs might still exist. A pair of test shoes, known as the Bugle Bead Shoes, with no bows, have never surfaced. Collector Bill Thomas claims to have the last pair, but refuses to show them to anyone.

When you consider it cost less than $5,000 to make ALL the Ruby Slippers in 1939, it may pay to learn shoemaking!