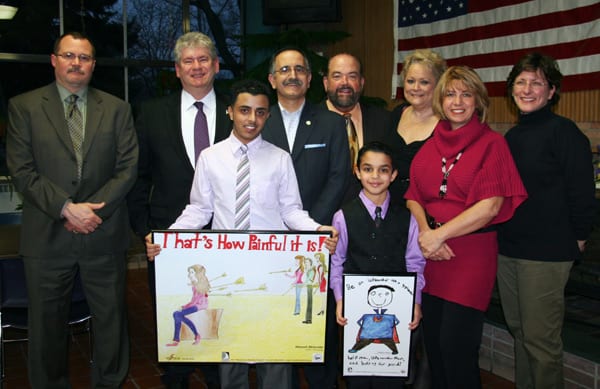 By SHERRI KOLADE
Times-Herald Newspapers
DEARBORN — Dearborn Public Schools students Hamzeh Abdorabe and Kaidhum Ganem were all smiles at the March 12 Board of Education meeting.

Abdorabe, an 11th-grader at Edsel Ford High School, and Ganem, a fourth-grader at Geer Park Elementary School, were winners of the district’s Anti-Bullying Poster contest.

The district-wide contest, which began in September, involved students coming up with anti-bullying posters to inspire positive behavior throughout the schools, while deterring bullying. The poster selection was narrowed down from more than 1,500 submitted posters. After it was narrowed down to about 40, the final two winners were chosen.

District Communications Coordinator David Mustonen said the winning posters will be displayed at the state capitol, in all schools, support buildings, buses and business throughout the community.

The posters will be displayed in roughly 500 businesses in the near future.

Also during the meeting Bus Attendant Gloria Ingram filled the part-time position that was approved during the Dec. 12 meeting. This position is funded by the district’s general fund.

There were several position changes and retirements scheduled during the meeting.

The next school board meeting is scheduled for 7 p.m. March 26 at the administrative office, 18700 Audette.