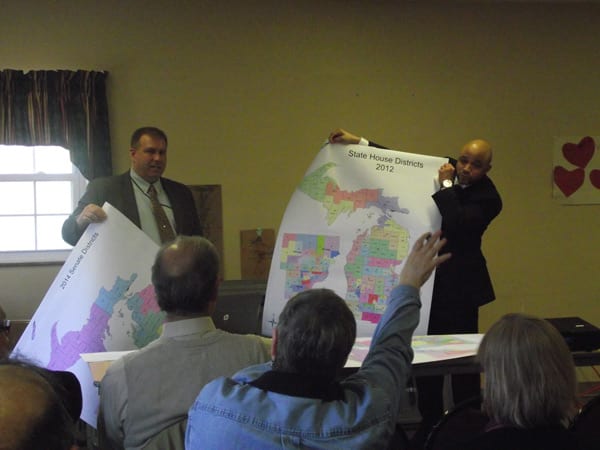 By SHERRI KOLADE
Times-Herald Newspapers
DEARBORN – Public officials explained the detailed process and history of redistricting March 26 and how it affects every resident in Michigan.

The event, hosted by the League of Women Voters Dearborn-Dearborn Heights, hoped to clear up any confusion about the state legislature’s process of redrawing state and congressional district lines every ten years. The redistricting lines were drawn in Michigan in 2010.

Michigan lost population (the only state to do so) according to the 2010 Census, causing redistricting because the state lost one seat in the U.S. House of Representatives.

The biggest three Michigan counties with population losses were Wayne with 135,314, Genesee with 12,098 and Saginaw with 9,989.

Redistricting comes down to state officials representing the people in their designated communities, said Hood, whose district includes Dearborn and Melvindale, but no longer River Rouge.

“Redistricting is a very personal thing for legislators,” Hood said.

Because members of Congress and state legislators are elected from districts at least once per decade, the district lines are redrawn block by block, Hood said.

“The way the lines are drawn can keep a community together or split it apart, leaving it without a representative who feels responsible for its concerns,” he said.

Redistricting can also change who wins an election.

“Ultimately the way the lines are drawn can change who wins, who controls the legislature, and which laws get passed,” Hood added.

The city of Dearborn will fall in the recently drawn 12th District during the 2014 elections.

After the most recent redistricting change, State Rep. David Nathan’s (D-Detroit) district does no longer include a section of east Dearborn. The east Dearborn section is now in Michigan’s 15th District, where State Rep. George Darany (D-Dearborn) serves.

Vatter, who has been involved in redistricting three times since 1990, said technology has made the process easier.

In several slide presentations, he pointed out that redistricting can allow politicians to choose their voters by area, eliminate incumbents and challengers, pack partisans, dilute minority votes and split communities.

“Redistricting has a huge influence on winning,” he said.

New district maps can be viewed by the public at the League of Women Voters offices.