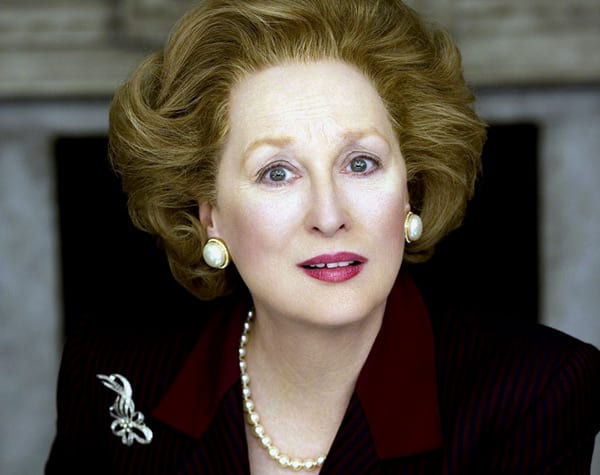 Meryl Streep in “The Iron Lady”

PICKS OF THE WEEK
“The Iron Lady” (PG-13) — Meryl Streep pulls a full-force Streep-a-thon in this scattershot biopic about Margaret Thatcher, England’s controversial conservative prime minister. Framed by the quasi-coherent mutterings of the elderly Thatcher in her late-life mental decline, the film shows a highlight reel of Thatcher’s life and career.

This flick managed to rake in another Oscar for the veteran actress, but that about sums up the appeal. Those unfamiliar with Thatcher’s bumpy political career won’t get much enlightment from the muddled narrative. If the Academy Award brought this film to your attention, then you pretty much know everything about it you need to know: Streep is a good actress, even when she’s in a boring and obscure movie.

“Miss Representation” — Teenagers spend an incredible amount of time in front of the television or computer screen, in addition to being bombarded with advertising over every inch of the real world. This documentary explores how women are portrayed through the media, and how that affects the development of young people. It’s not a singular study, but a general look at the role of women in the media, all punctuated with statistics. The film could be seen as an introduction into a broad and relevant discussion.

DOGS OF THE WEEK
“The Darkest Hour” (PG-13) — A band of merry young folk goes to Moscow for a good time only to have their party crashed by a bunch of invisible aliens. The movie also is under attack by invisible character development and an invisible budget. Folks get turned into ash upon contact with translucent alien blobs, and any dread or excitement quickly evaporates as the movie becomes a silly, over-serious “Ghostbusters” cousin when the characters start fighting back.

Each character might as well have a red shirt with a number on it, as the order in which the unlikable protagonists are killed off is clear before the aliens even make their invisible appearance.

“Animals United” — This kids’ flick stands out from the pile of generic talking-CG-animal-adventures shoveled out by Hollywood, but only because this one is from Europe. So lacking in imagination and storytelling that it may as well be “Madagascar 6: Animals with Voices You Don’t Recognize.”

The plot has something to do with a lack of water, but this isn’t “Rango.” The animals make their foray into the land of people, but this isn’t any of the myriad movies in which that happens either. It’s just a weirdly familiar and wholly forgettable film. If you’ve run out of movies to show the kids, and “Animals United” is the only one left at bat, just let them play outside — they might find an interesting stick or something.