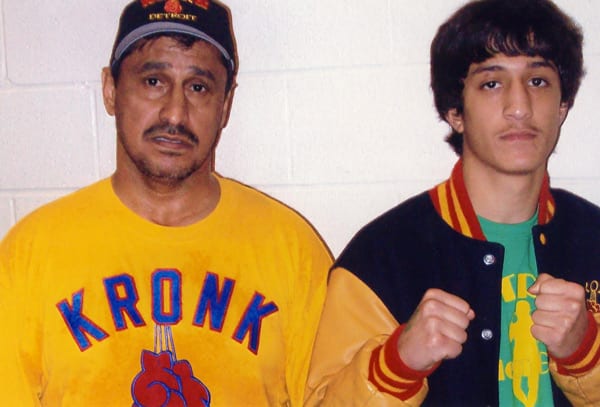 Photo by Daniel Gretzner
Ahmed Mahmood (right) will participate in the National Golden Gloves Championships in late April in Denver. His father, Majed Fradi-Mahmood, (left) is his coach.

By Daniel Gretzner
Ahmed Mahmood started boxing when he was just 6 years old. Now, it is evident that his training, under his father, has paid off. The 17-year-old Dearborn High School senior has won the Southeast Michigan Golden Gloves Open Bantamweight championship.

On March 31, Mahmood won a unanimous decision in the open class category of the local Golden Gloves finals held at the Gibraltar Trade Center in Taylor. The Detroit Golden Gloves Chapter is a member of the Michigan Association-USA Boxing Inc. Mahmood’s victory has assured him advancement to the national bouts scheduled for April 25 in Denver.

Mahmood’s lifetime mark in the ring as an amateur is 104-8.

“I plan on turning pro in May and getting an opening four-round bout on a coming Joe Louis Arena card,” Mahmood said last week.

Is it possible that Mahmood could be the next big prize fighter to hail from Dearborn since Chuck Davey? Davey had a successful career in the boxing ring quite some time ago. He was a Dearborn native who graduated from Fordson and Michigan State University.

We do wish Mahmood well in his up and coming bouts, both amateur and pro. He trains with the Kronk Boxing Club in Detroit.

(Comments from readers are always welcome. Send all thoughts and ideas to [email protected] or call 734-818-6577).