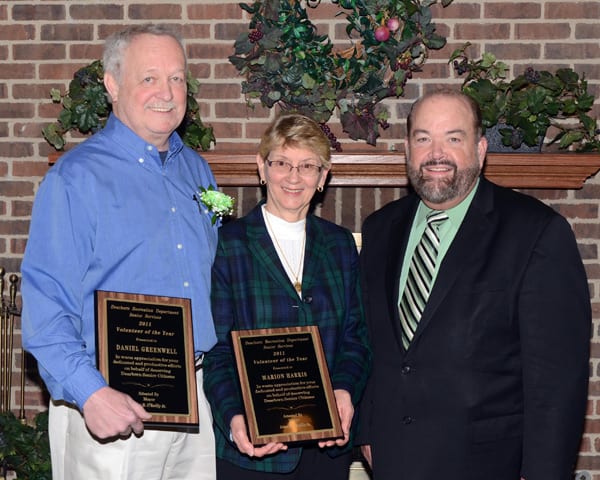 Photo courtesy of the city of Dearborn
Mayor John O’Reilly Jr. (right) congratulates Daniel Greenwell (left) and Marion Harris, who were awarded the “Senior Volunteers of the Year” during the volunteer appreciation breakfast March 14.

DEARBORN – Volunteers who regularly donate their time to help their fellow residents improve the quality of life in Dearborn.

The Recreation Department’s Senior Services Division, in partnership with the Senior Citizens Commission, offers many programs that benefit senior residents.

The annual Senior Service Volunteer Appreciation Breakfast was held March 14 to thank all the volunteers who provide assistance in various programs in the city.

Marion Harris and Daniel Greenwell were awarded the “Senior Volunteers of the Year” honors for 2012.

The winners were announced and congratulated by Mayor John O’Reilly Jr.

Harris was born in and raised in Detroit and moved to Dearborn in 1982. She graduated with a Bachelor of Arts degree from Western Michigan University and taught school for many years. She also worked for GMAC and retired after 17 years of service.

She has been married to her husband, Donald, for 46 years and has two daughters and five grandchildren.

Harris is a member of the Village Herb Associates, which is a volunteer group within The Henry Ford. Her main focus there is in the Burbank Garden, which is a teaching/learning and production garden. She additionally volunteers at Henry Ford Museum and Greenfield Village.

She is a member of the Master Gardener Association of Wayne County. She co-chairs a committee involved with the planning and executing the annual Gardening Conference held on the University of Michigan-Dearborn campus each September.

She volunteers with the Dearborn Senior Center AARP income tax program and is a Eucharistic minister at St. Anselm Church.

Greenwell has been a Dearborn resident since 1970. He graduated from Lowrey High School. He received his degrees from Henry Ford Community College and the former Detroit College of Business, now known as Davenport University.

He spent 38 years in the logistics/freight business including rail, truck and air freight management. He retired from Exel Logistics as the vice president of operations in 2004 after 22 years of service.

Greenwall has been volunteering with the Meals on Wheels program since 2004.

In 2006, he assisted in the preparation of taxes for seniors and became the local coordinator of AARP senior tax services in Dearborn in 2009.

He is active in the Dearborn Outer Drive Kiwanis Foundation and has served as its treasurer for the past four years.

In his free time he enjoys golfing, chasing his grandchildren and his volunteer work.