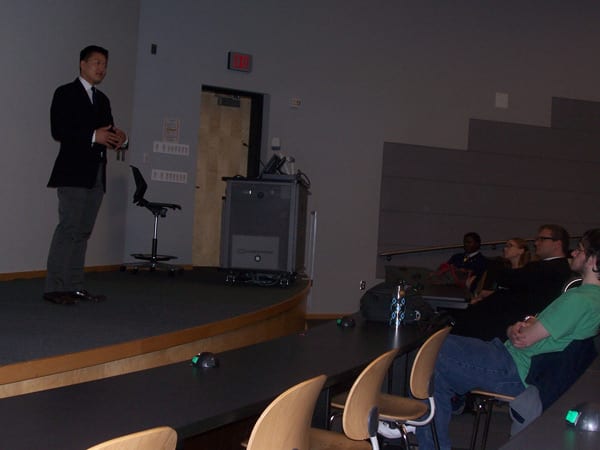 By SHERRI KOLADE
Times-Herald Newspapers
DEARBORN – Dan Choi has a simple message to tell others: “I am somebody.”

Even if he and others were jailed after being chained to the White House fence shouting that same message, Choi, an openly gay Army veteran of the war in Iraq, wants people to know who he is.

Choi visited the University of Michigan – Dearborn April 5 and spoke to about 50 people in the Borg-Warner Auditorium about his personal experiences and advocacy to overturn “Don’t Ask, Don’t Tell,” the official U.S. policy on gays serving in the military that barred openly gay military personnel, until it was repealed in 2010.

Choi, a West Point graduate and Arabic linguist, was honorably discharged in 2009 because he announced on television that he was gay. Choi, a former lieutenant, is still attempting to re-enlist.

During the discussion, Choi said before his discharge, it was not easy hiding his sexuality.

“I was told the thing you did was make sure everyone else around you was comfortable,” Choi said. Choi said he remained closeted because he might make his friends feel awkward.

So as he remained silent during his years of service in Iraq in 2006 and 2007, Choi had an inner turmoil that was hard to deal with.

Choi added that he also kept his issues, anxieties and pains to himself but it wasn’t until he fell in love that he realized he was living a lie.

“I never understood that in terms of lying until I fell in love,” he said. “Then it wasn’t just me anymore…I was putting my boyfriend in the closet.”

After being discharged, Choi came out to his family and friends at his own comfort level. First, he told his sister that his “girlfriend, Martha” was actually his boyfriend, Matthew.

Choi had trouble at first trying to tell his family, who have deep roots in the Southern Baptist church.

“I told my sister, warming up to tell my parents,” he said. “And she was so surprised. I told her ‘you know how I keep saying Martha works in the jewelery industry? She doesn’t, she works for Gucci and she is a man.’ Then I hung up. She called right back and said ‘I don’t know why you were hiding the whole time. This is so great… and I get free Gucci clothes now!’”

When Choi worked up the courage to tell his parents, he said even though they did support his orientation, they still loved him. But it was and still is an uphill battle, he said.

“In the beginning (my mom’s) immediate response was (being gay) is not true. It does not exist,” Choi said. He added that someone cannot say “I love you, but being gay is not real.”

“You can’t say those things at the same time,” Choi said.

After coming out, telling others his sexuality and fighting for gay rights, Choi said people cannot ignore gay rights.

“Something magical happens when we shout ‘I am somebody,’ he said. “We tell all the other passersby, all the other subjugated, stigmatized and scapegoated people ‘when people define your morals, you lose that somebodyness.’”

Choi added that gay people can die for America but they are not able to get married in America.

“If we can shout ‘I am somebody,’ what is your excuse?” he asked the crowd. “What are you waiting for?”

Detroit resident Julian Jones, who served in the Navy for 10 years and is a part of the Student Veterans of America, an organization that co-sponsored the event, said Choi’s message was very informative.

“I thought he had some very insightful things to say about gay people in the military,” Jones said.

“It is a message the community and students should hear,” Day said. “College is often a time where people are figuring out who they are and what values are important to them. His message of living with honor and integrity is important for anyone to hear, particularly our young people and those learning to be leaders.”

For more information about Choi go to www.ltdanchoi.com/bio.html.