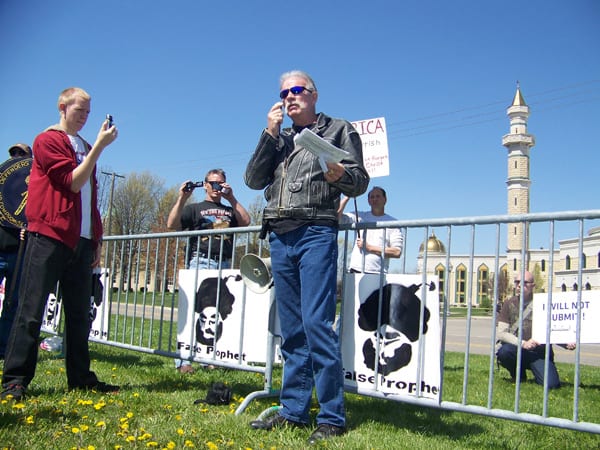 Photo by Sherri Kolade
The Rev. Terry Jones speaks to a small crowd in front of the Islamic Center of America during his visit to Dearborn April 7. Jones spoke about topics including his beliefs about preferential treatment given to Muslims.

By SHERRI KOLADE
Times-Herald Newspapers
DEARBORN — The Rev. Terry Jones and his camp returned to Dearborn with a controversial speech on Islamic views April 7.

After winning a lawsuit against the city, public safety concerns and controversy surrounding his visit were met with little to no opposition, as a small gathering of protesters from By Any Means Necessary, were cordoned off by police, shouting against Jones and his followers.

Jones and associate pastor Wayne Sapp spoke on a divider in front of the Islamic Center of America, sectioning off about 25 of Jones’ followers and members of the media.

Sapp spoke through a hand-held loudspeaker about his views on the downfall of Christianity and his belief that churches should rally against Islam.

“We’re here because simply the church has not done its job,” Sapp said. “If the church – if the so-called Christians – had done their job, this would not be taking place. We wouldn’t have to preach abut the threat of Islam, the threat of Sharia (law) in America.”

Sharia law or Islamic law, influences the legal code in most Muslim countries, described as the fundamental religious concept of Islam.

Sapp then gave the floor to Jones who spoke about why he preaches.

“I do what I do concerning Islam – and not only Islam – but also anywhere I feel the Constitution is being not represented,” he said.

Jones went on for nearly an hour describing what he feels to be a threat of Islamic laws such as Sharia, “honing in on” American values.

“Sharia is alive and active in America,” he said.

Jones further described preferential treatment of Muslims specifically in Dearborn, describing footbaths installed at the University of Michigan-Dearborn, along with Halal menu options and football practice starting at special times for Ramadan. He said the improvements cost taxpayers thousands of dollars.

“It is important to fight for the right of speech,” Gruska said. “As inconvenient as it might be, this is a legal right.”

Participant Nicole Conaway, a Detroit resident and member of By Any Means Necessary, a Detroit-based civil rights coalition, protested against Jones in the name of equality, she said.

“I came here to tell Terry Jones and any other racist that we don’t want them here,” Conaway said. “They need to get out of Dearborn and never come back.”

Conaway added that BAMN attempts to protest all of Jones’ speeches in Dearborn.