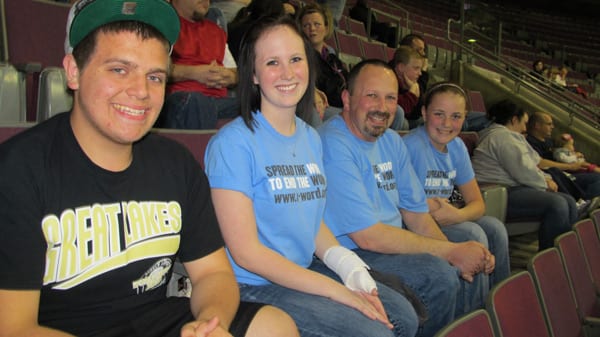 Photo by Sue Suchyta
Katie Weiss (second from left), 17, a senior at Allen Park High School and Pistons “Come Together” program honoree for outstanding community volunteer service, attends a Pistons game April 3 at the Palace of Auburn Hills. Also shown are her boyfriend Trevor Stier (left),17, a senior at Allen Park High School; her father, Michael Weiss; and her sister, Kelsey Weiss, 13, an eighth-grader at Allen Park Middle School. Weiss planned and implemented a presentation with guest speakers March 7 at the Allen Park Center for the Arts to increase local awareness of the “Stop the R-Word” campaign.

By SUE SUCHYTA
Times-Herald Newspapers
Allen Park – Allen Park High School senior Katie Weiss, 17, said she wasn’t much of a Detroit Pistons fan before, but she is now.

Weiss, who organized a presentation in Allen Park March 7 to stop the use of the word “retarded,” was honored as a community champion by the Pistons’ Come Together program April 3 during their game against the Orlando Magic at the Palace of Auburn Hills.

During the game, she received an autographed Pistons jersey with her last name on it from player Jason Maxiell courtside during half-time. She also received a certificate of appreciation signed by Pistons owner Tom Gores.

Weiss worked with fellow students, family members and guest speakers to create a Spread the Word / End the Word campaign to stop the use of the “R-word” in Allen Park Public Schools.

The presentation, held March 7 at the Allen Park Center for the Arts, featured speakers who discussed the negative impact of the “R-word” and its impact on students with special needs. An autism spectral disorder teacher, a school social worker and parents of students with intellectual disabilities, including School Board President Frank Liberati, spoke at the event.

When Weiss was nominated for the award school officials said the presentation may be repeated each year during Allen Park High School’s diversity week.

“Katie Weiss is a perfect example of a community champion, someone who selflessly goes above and beyond to help those in her community,” Jeff Corey, vice president of public relations for the Palace, said.

Weiss said her idea for a local Stop the R-Word program was prompted this year when the Link program at her school, which pairs incoming freshmen with upperclassmen to help smooth the transition from middle school to high school, matched her with an autistic student for one class each day.

While the Link program was Weiss’ first experience with students with special needs, she said she soon realized how hurtful the “R-word” was to them and their families. The realization led her to organize a local program to educate other people about the topic.

Once she gained the support of Allen Park High School Principal Janet Wasko, Weiss lined up speakers and volunteers to take part in a local evening presentation based on the national campaign for “Spread the Word to End the Word.”

More than $600 was donated during the event, which was given to the ASD classroom for the purchase of educational materials.

Weiss said her effort to end the use of the “R-word” has received some negative feedback, but mostly praise, and said that some audience members cried during some of the presentations.

Weiss said she heard a lot of positive feedback following the presentation.

“The families of the students with autism are happy with it,” Weiss said. “It’s been a really positive program.”

“I also work closely with these autistic children and I think it’s really great that she’s doing this program and trying to change this,” Stier said.

Weiss said she is trying to eliminate the use of the “R-word” as a hurtful term and teach people to use the term “intellectually disabled” or “intellectually challenged” when referring to people with special needs.

As a result of her experience working with autistic students this year as part of the Link program, Weiss said she has decided to major in special education. She has been accepted at Central Michigan University, where she will start classes in the fall. She said she plans to major in English and get her bachelor’s degree in special education, followed by a Master’s degree.
Her father, Michael Weiss, 44, of Allen Park, said he is very proud of her.

“She enjoys this so much, and these kids that she’s involved with have become a big part of her family,” Michael Weiss said. “She enjoys being with them and everything and I’m happy that she’s decided where she wants to go to school and what she wants to major in already at such a young age. She’s already made those decisions.”

Her 13-year-old, sister Kelsey Weiss, an eighth grader at Allen Park Middle School, said that Katie’s example and leadership has led her to volunteer in her middle school’s ASD classroom.

Her mother, Veronica Weiss, 45, of Allen Park, said it felt amazing to watch her older daughter be recognized for all her hard work.

“She set her goals and she’s sticking to them and she’s got such big dreams,” she said. “I have nothing but high hopes for her.”