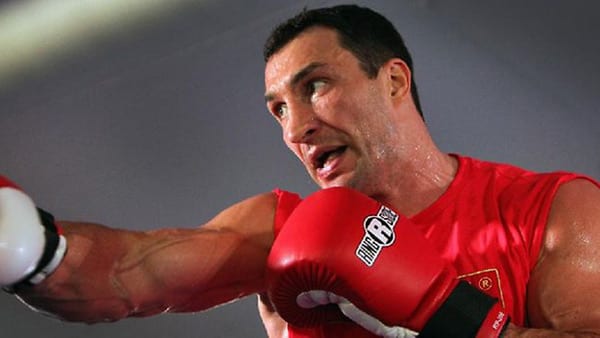 By Cindy Elavsky
Q: My friends and I watched the Wladimir Klitschko heavyweight-title bout against Jena-Marc Mormeck at our local bar, and were happy to see Wladimir retain his heavyweight title. One of my friends said he heard that Wladimir intends to start up an acting career when he’s done with boxing. Is that true? — John R., Indianapolis

A: While it’s true that the handsome Ukrainian has dipped his foot in the Hollywood pool — the documentary “Klitschko,” which centers on his and his older brother Vitali’s rise in the boxing world, has been making quite an impression on festival goers since premiering at the Tribeca Film Festival last year — Wladimir is keeping his eye firmly on his boxing career.

I spoke with him recently about the acting rumors, and he told me: “While I am asked often about being in movies — usually it’s a Russian mob character — it’s always the same thing. I did play myself in ’Ocean’s Eleven,’ and I did two German comedies. But right now I’m playing the role called the Heavyweight Champion of the World, and it takes all of my time. I really like to play it, and I have to stay focused. So there’s no nonsense with any wannabe Hollywood stuff. If I lose my focus, then I’m going to lose the titles, and I don’t want to do that.”

You can watch Wladimir defend his title July 7 against Tony Thompson, and read my entire engaging interview with the charming heavyweight at www.celebrityextraonline.com.
* * *
Q: I am so excited to see “The Avengers,” starring all of my favorite comic-book heroes, especially Captain America. Because of “The Avengers,” does that mean there won’t be a “Captain America: The First Avenger” sequel for a while? — Fred D., via e-mail

A: Walt Disney Studios recently announced that Chris Evans will again suit up in red, white and blue to save the world from the bad guys. You can expect the sequel to last summer’s blockbuster hit to arrive in theaters April 4, 2014. While it’s still too early to camp out for tickets, at least there’s a release date in sight.
* * *
Q: I’m really sad about this being the final season of “Desperate Housewives.” How are the ladies of Wisteria Lane taking it? — J.J.

A: If one of Marcia Cross’ latest tweets is any indication, they are as sad as you are. Marcia recently lamented via Twitter: “How do you handle goodbyes? Me, not so well … already feel so sad and vulnerable … [I] will miss my ’Desperate Housewives’ family terribly.”
* * *
Readers: Here’s an update on release dates of various HBO projects that have been mentioned in past columns. First, season five “True Blood” premieres on June 10 at 9 p.m. with 12 all-new episodes. Also, “Newsroom” — the Aaron Sorkin drama starring Jeff Daniels, Emily Mortimer and Sam Waterson — premieres its 10-episode first season on June 24 at 10 p.m.