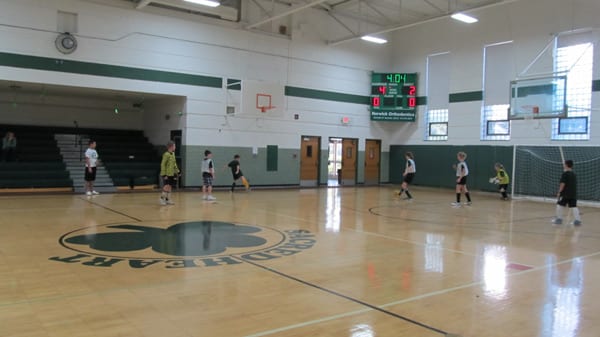 By SUE SUCHYTA
Times-Herald Newspapers
DEARBORN – In a school gym, the children aren’t bouncing off the walls, despite all their running and kicking. But they don’t seem to mind – they’re too busy playing futsal.

A popular South American sport similar to indoor soccer, futsal is played on a hard, indoor court with a heavier, slightly smaller ball with less bounce than a soccer ball. Since players may not bounce or play the ball off walls or boards, coaches said the game moves faster, with more emphasis on improvisation, creativity, passing and footwork ball control.

Caruso noted that futsal is simply an intramural sport for the kids he coaches now, and is not currently a CYO-sponsored sport.

Caruso added that the game is all about short kicks, passes and footwork, which are skills used in soccer.

Because futsal is played on a gym floor, with no use of the walls like indoor soccer, when a ball goes out of bounds it goes on the touch line and a player kicks it in.

If the ball goes behind the goal a referee hands it to a goalie to throw back in.

Right now first through eighth graders from several different parish and public schools are playing intramural games in the Sacred Heart School gym because the coaches are not aware of any other teams for them to play.

Caruso said that in addition to Sacred Heart School students and Sacred Heart religious education students from public schools, they have children playing from St. Martha and St. Joseph, their sister parishes in Dearborn, from Dearborn Divine Child, from St. Linus in Dearborn Heights and from St. Francis Cabrini in Allen Park.

Neighborhood kids not affiliated with the parish found out about the program and are welcome to play, Caruso said.

About 75 kids now play in their intramural program, so they have closed enrollment, but are contemplating running a summer program in the Sacred Heart gym.

Caruso said that right now the sport is barely known in the United States, and he said the soccer clubs are just beginning to pick up on it.

Caruso said it is more than just a training sport for soccer, though, adding that scores are kept during each of two 20 to 25 minute halves, so it is a very competitive sport.

“The ball moves so fast (in futsal) it forces them to control (it) – it works their technical skills,” Pieknik said.

Volunteer coach Dave Divis, whose fifth grade son Michael, 10, attends Sacred Heart School, said futsal is also a more realistic option for outdoor soccer conditioning prep because the players are not bouncing the ball off the boards and changing positions when the ball ricochets.

Sacred Heart fifth grader Matt Gaynor, 10, who said he does not play soccer, said he likes playing futsal because it lets him be active even when it’s cold outside.

Sacred Heart fifth grader Mike Divis, 10, who plays soccer, said that he sees the higher scoring potential of futsal as an advantage.

“You really get hyped up (playing futsal) because (in) soccer the scores are really low but in this (futsal) they can get really high,” Divis said.

Sacred Heart fourth grader Kristian Sakulidis, 10, added that futsal’s scoring potential is also higher because each player is more likely to get the ball.

“You might see in soccer where there might be a couple kids just walking and not doing anything and maybe get the ball once or twice,” Sakulidis said. “In this game it’s so active you can’t look to see one of your fans in the crowd… it’s so active, everyone gets the ball (and is) making goals.”

Sacred Heart seventh grader Brandie Sakulidis, 12, who plays soccer, said she also joined futsal for more of a challenge. She usually plays defense, and said futsal is teaching her to have better control over the ball.

Lindbergh fifth grader Camryn Pieknik, 10, who is focused on honing her soccer skills, is glad that futsal is giving her more goal- shooting practice and a chance to get more shots off before the spring outdoor soccer season starts.

She added that the indoor playing surface is slippery and warned first time futsal players to wear regular athletic shoes, not outdoor soccer cleats when playing futsal in a gym.

Jan Gaynor, mother to fifth grader Matt, 10, agreed that getting her son active was a positive benefit of futsal.

“They’re running their little fannies off instead of sitting in front of a T.V. or with their electronics,” Gaynor said. “And they love (futsal). He’s not much of a soccer kid, so it’s kind of surprising.”

Keith Godin, father to sixth grader Cameron, 11, said that even though his son plays in several soccer leagues, he would play video games if he wasn’t in the gym playing futsal.

“I love it,” Godin said. “They get a lot of exercise… when they’re not playing basketball it’s good to get them running around.”

Caruso said if he and the other coaches at Sacred Heart can get other neighboring parishes to start teams, they will approach CYO officials in the Archdiocese of Detroit and ask them to make futsal a CYO sport.

“It’s a pretty unique sport right now,” Caruso said. “If we see some bigger interest and we get some calls from some other athletic directors we’ll see if we can’t at least have it as an exhibition sport even if CYO doesn’t want to sponsor it.”

“We didn’t know what to expect when we first offered it,” Caruso said.