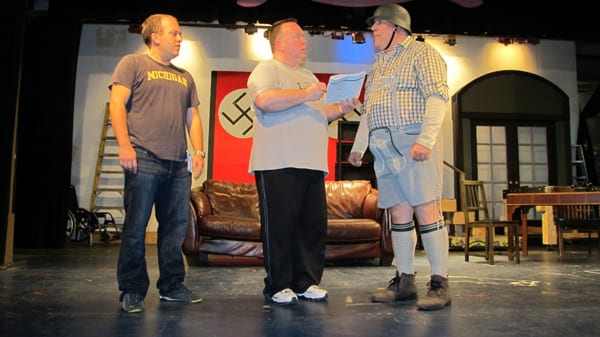 Photo by Sue Suchyta
Dearborn residents Dan Hartley (left) as Leo Bloom, Brian Townsend as Max Bialystock and Mike Falzon as Franz rehearse a scene from the Mel Brooks and Thomas Meehan musical comedy “The Producers.” The show runs for four weekends, April 27 to May 20 at the theater, located at 21730 Madison in Dearborn. For more information, call 313-561-TKTS or go to www.playersguildofdearborn.org.

By SUE SUCHYTA
Be ready for lots of laughter as the Players Guild of Dearborn launches the closing show of their season, the very funny and irreverent musical comedy “The Producers.”

Ten days prior to opening a run of act one with limited tech was so funny that by opening night one might assume that some of the storyline will be lost to long-lasting laughter.

The story itself is simple: When Leo Bloom, a mild-mannered accountant shows Max Bialystock, a down-on-his-luck producer that a quickly closing flop could potentially make more money than a hit, the two set out to find the worst script, director and cast to ensure a flop.

The show is directed by Valerie Haas of Inkster, with musical direction by Ken Pletzer of Northville and choreography by Valerie Mould of Royal Oak.

Haas said that anyone who enjoys the genius of Mel Brooks will enjoy the show, as well as anyone with a wacky or warped sense of humor.

“If they take themselves too seriously and think that they are in some kind of righteous mode, they probably won’t like this show,” Haas said. “But since most people who enjoy theater – good theater, anyway – keep their minds open for all these different kinds of things and are very open to the understanding of satire and parody and things like that there’s just joke upon joke upon joke to love in this show.”

She said that everything makes her laugh during rehearsals.

She said there is one stereotype after another.

“The whole idea of this Nazi who has written a play that talks about how wonderful Hitler was – he’s going to redeem him, clear his name – is so wackily strange you can’t see somebody in lederhosen next to a pigeon coop and not laugh,” Haas said. “You can’t see Phil Booth walk out in a dress that looks like the Chrysler Building and talk about how he doesn’t look right for his costume party and not laugh. You can’t look at Max trying to convince Leo to cook the books so they can rip off the backers and take off to Rio and not laugh.”

He said people will be surprised by the musical numbers in the first act, as well as the play-within-a-play “Springtime for Hitler.”

He said the funniest number for him is the first act number “Keep it Gay.”

“It’s hilarious,” Bartos said. “If you don’t belly laugh you have no sense of humor at all.”

Dearborn resident Phil Booth, who plays Roger DeBris and wears a dress in “Keep it Gay” thinks friends who usually see him in a tie will find the number to be very funny.

He said the show is very high energy and fast-paced, with a laugh every other line, plus great dancing and singing.

“If they’re interested in coming out and … just being picked up and lifted up for a couple hours where their feet don’t touch the ground, (to) just laugh ’til their sides hurt this is the show to come see,” Booth said.

Townsend, who plays Max, agreed that audience members will laugh themselves silly.

“No matter what your proclivities you will find something in this show to just crack you up,” Townsend said.

Hartley agreed that it is an absolutely ridiculous show and the timing of lines make it goofy.

Hartley said he was a Brooks fan before being cast in this show, and lists “Spaceballs,” “Young Frankenstein” and “Blazing Saddles” as favorites.

Pletzer, the music director, said he has a strong cast with which to work.

“They’re amazing,” Pletzer said. “They make my job easy and I like that part about it.”

He added that the scene where the women come out in their “Springtime for Hitler” outfits with sausages and pretzels on their heads is a welcome surprise.

“I usually have the best seat in the house,” Pletzer said. “When I can glance away from the music, that is.”

Additional cast members include Dearborn actors Mike Falzon as Franz Liebkind and Ken Kilgore as the stormtrooper soloist, Alex Gojkov of Redford as Carmen Ghia, Kimberly Elliot of Canton Township as Ulla and Barbara Wulff of Allen Park as the “Hold Me /Touch Me” soloist.

The show launches its four-weekend run Friday at the Players Guild of Dearborn, 21730 Madison, southwest of the intersection of Monroe and Outer Drive in Dearborn.

The show finishes its run with 8 p.m. shows Friday and Saturday.

All performances are at the Wyandotte Art Center, 81 Chestnut St. in Wyandotte. For more information, go to www.AKTtheatre.com.

Director and choreographer Angie Kane Ferrante, 27, of Wyandotte, brought out the best in her talented cast of 15 high school- and college-age actors, as well as two older adults who play multiple authority figure roles.

Set in late-19th century Germany, the rock musical tells the story of teens discovering their emerging sexuality amidst the stress factors in their lives.

The show contains adult themes and sexuality, and parents are strongly cautioned.

The original non-musical play, written in Germany in 1892 by Frank Wedekind, was originally banned in Germany because of its candid portrayal of abortion, homosexuality, rape, child abuse and suicide.

From the strong leads to the supporting ensemble, the show is filled with talented actors and strong vocalists.

The company also is very cohesive, and they bring out the stress and fears of the teens in the show with unflinching and uncompromising honesty.

The leads include Lisa Youngs, 21, of Wyandotte as Wendla, an innocent girl whose mother will not tell her how babies are conceived, which leads to life-shattering consequences when Wendla explores physical passion with Melchior without knowledge of birth control or conception.

Jack Hundley, 23, of Wyandotte, plays Wendla’s love interest Melchior, an intelligent and rebellious yet naïve young man whose unconventional support for his friends puts him at risk.

Peter Giessl, 24, of Rochester Hills plays Moritz, Melchior’s intense and nervous best friend for whom puberty is an emotional rollercoaster.

Shaylyn Kiely, 21, of Wyandotte, plays Ilse, a girl who leaves an abusive home and eventually joins an artists’ colony.

The songs – from solos to duets to large company production numbers – convey the intensity of the show.

Highlights include Youngs and the female chorus in “Mama Who Bore Me,” and Hundley and Giessl with the male chorus in “The Bitch of Living,” which epitomizes the frustration of the teens.

The company numbers are moving and emotional. Standout songs include “My Junk,” “The Dark I Know Well” and the stirring “I Believe” at the end of the first act.

The intensity rises throughout the second act, along with the characters’ grief, tensions and frustrations. Songs like “Left Behind” and “Totally F—ked” cover the range of company emotions from sad grief to palpable anger.

In an interesting twist, the closing number, “The Song of Purple Summer,” is performed by the company in contemporary street clothes, which reminds the audience that the problems encountered by the teens from nearly a 120 years ago are not that different than the ones faced by youth today, especially amidst the conservative political climate with respect to reproductive freedom issues and sexual expression and abuse.

The two older adults in the show, Lindel Salow, 50, of Dearborn, who plays nine different characters, and Jean Pilon, 56, of Wyandotte, who plays five roles, symbolically portray the rigidness of their society as enforced by the adults and as seen through the harsh and suffering eyes of the youth. Both Salow and Pilon excel in their multiple demanding roles.

Others in the strong supporting cast include Jason Glenn, 19, of Wyandotte as Ernst; Lincoln Park residents Sarah Mikota, 16, as Martha and Hope Morawa, 20, as Anna; and Sebastian Adams, 21, of Detroit as Georg.

For more information about AKT Theatre Project’s performances of “Spring Awakening” call 734-258-8370 or go to www.AKTtheatre.com.

AKT TO HOLD ‘INTO THE WOODS’ AUDITIONS
The AKT Theatre Company will hold auditions for “Into the Woods” at 7 p.m. May 25 at the Wyandotte Art Center at 81 Chestnut St. in Wyandotte.

Those auditioning should prepare 16 measures of a song that best displays their vocal ability. The auditions also will include movement, cold readings and improvisation.

The show will run Aug. 2 to 11 at the Wyandotte Art Center. For more information, go to www.AKTtheatre.com or email Angie Kane Ferrante at [email protected]