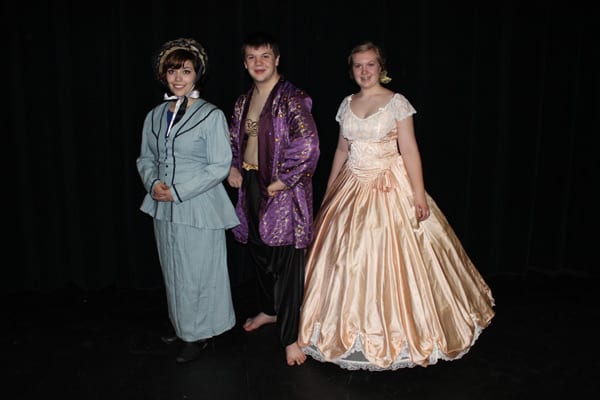 Photo by Leslie Herrick
The theater department at Edsel Ford High School in Dearborn will present “The King and I” at 7 p.m. Thursday through Saturday, with an added 3 p.m. Saturday matinee. The cast includes senior Meara Thierry (left) as one of two actresses playing Anna Leonowens, sophomore Benjamin Timpf as the King and senior Annelise Folkema as the other actress playing Anna Leonowens.

By Sue Suchyta
Dearborn Edsel Ford High School will present the Rodgers and Hammerstein classic musical “The King and I” at 7 p.m. Thursday through Saturday, with a 3 p.m. Saturday matinee.

Set in the early 1860s, the musical follows the story of Anna Leonowens, who was hired by the King of Siam to teach his children and wives the “scientific” ideas of Western civilization.

As the king and Anna’s cultures clash, both struggle with an attraction for each other neither sought nor expected.

A second forbidden love, between a young woman who is a gift to the king, and a scholar who accompanied her from Burma provides a secondary love story.

Several of the key roles are double cast to give more high school students a chance to perform leading and supporting roles.

Co-director and producer Robert Doyle, who directs Edsel Ford’s theater and choral programs, said the play was chosen because it has a large cast, allowing them to include children from their feeder elementary and middle schools, and because it is about a meeting of two different cultures.

“(It is) the same thing that we deal with… in our melting pot of America where there are different cultures that come together,” Doyle said.

In addition to featuring cute kids and talented vocalists, co-director and prop mistress Diane Cliff said the show, like Dearborn, is multicultural, and is so much more than the Yul Brynner movie people remember.

“We have a British woman going into Siam, and so you have the clash of cultures,” Cliff said. “We also have multicultural children who are playing the different roles. We have Arabic children, we have African Americans, we have white kids, and they’re all working together and learning.”

She said that much of the show that was considered progressive in the ’50s we shudder at today.

“But it is multi-cultural just like Dearborn is,” Cliff said. “And (it has) the clash of cultures and how people can work together and have friendships and good relationships despite differences.”

Senior Lucas Ramon, 18, one of two students playing Lun Tha, said that any show that has a mix of cultures and shows their differences and similarities, as well as their conflicts and coming together in a positive way is something to which audiences from a multi-cultural community can understand and appreciate.

“Everyone from different backgrounds can relate to it and enjoy it because … they can put themselves into the shoes of the King of Siam or Anna the English school teacher,” Ramon said. “They can relate to that – being in a new environment and not knowing what to do and adapting to it.”

Junior Sarah Husein, 17, who shares the role of Lady Thiang with junior Clare Russell, 17, said that the 50 elementary and middle school children in the cast (kindergarteners through eighth-graders) are fun to work with and being in the show gives them a good theater foundation.

“It’s a good atmosphere for them to be in, as opposed to being home and playing video games and watching TV,” Husein said. “So it’s a good foundation and building block for them.”

Russell was part of the theater program at Edsel Ford before entering high school herself, and was in Rodgers and Hammerstein’s “Cinderella” as a fourth-grader, “The Wizard of Oz” as a sixth-grader and “Les Miserables” as an eighth-grader. She said she felt a part of Edsel Ford’s theater family before entering high school and just wanted to continue.

Husein said that people in Dearborn, whose Arabic cultural concentration is unique even in Michigan can relate to the blending of different cultures represented in the show. She added that the cast has developed a family atmosphere.

Senior Meara Thierry, 18, one of the two actresses who play Anna Leonowens, said the cast has a lot of heart and shows that they love what they are doing, are having fun with it and are like a family. She said she has had fun learning a British accent and how to waltz.

Sophomore Ben Timpf, 16, is playing the King of Siam for the second time, having played the role previously in a Dearborn Heights Civic Theatre summer production.

“It’s honestly one of my favorite roles in all of musical theater,” Timpf said. “It’s such a role that the audience can connect with and feel for but still have worked up feelings because of all the anger that he throws at Anna, and roughness so she knows that he’s in power,” Timpf said. “He’s the king and she’s just ‘a lowly woman.’”

He added that the King of Siam is also conflicted by his emotional feelings for Anna, who at the same time represents to him the superpower – England – who he suspects is trying to take over his country.

In the play, Anna teaches the king to dance, but in reality, Timpf had more dance experience than the two actresses playing Anna.

“That was a lot of fun. Both of our Anna’s are both very sweet but just trying to teach them how to stay on their toes and stay graceful with it … multiple times the choreographer would say ‘Just teach them!’” Timpf said.

He added when he switched to acting like he was the one being taught to dance by Anna when he pretended to trip he would bring them down with him.

Timpf said he learned to waltz in Cinderella at the Players Guild of Dearborn, and continues to dance with Polanie, a local Polish dance group. He said he does a polka, though, and not a waltz with Anna.

Nathaniel Booth, who is double cast as Lun Tha, said that way the cast expresses each character is unique. He said the double cast characters are well matched to their double cast counterparts.

“Our casts are so matched together that there’s so much chemistry in between each of the characters that in music terms it’s a symphony,” Booth said. “Each instrument is played complementing the other one, and so they all blend – it’s just amazing.”

Others in lead or supporting roles include David Nycz as Captain Horton, Brendan Hay as Louis Leonowens, Kevin Talanges and Josh Cliff as the Interpreter and the Kralahome, and Spencer Venis as Phra Alack.

Tuptim is played by Sarah Remily and Kara Westra, Prince Chulalonghorn is portrayed by Nicola Morabito, and Sir Edward Ramsey is played by Errick Lisk and Jared Nelson.

GUILD’S ‘THE PRODUCERS’ IS A LAUGHTER-FILLED MUSICAL
The Players Guild of Dearborn launched a four-weekend run of the laughter-filled Mel Brooks musical comedy “The Producers” April 27 at the Guild theater, 21730 Madison, southwest of the intersection of Monroe and Outer Drive in Dearborn.

To say the show is funny is an understatement. It is belly laugh, catch your breath, laugh until your eyes water funny.

Directed by the talented Valerie Haas, with a dedicated and hard-working cast and crew, the show is an entertaining and fun way to laugh your cares away.

Max, a down-on-his-luck Broadway producer played by Brian Townsend, is told by Leo, a mousy accountant, portrayed by Dan Hartley, that a show could generate more money for a producer by being a quickly closing flop than by being a long-running success, which sets the storyline in motion.

Max is determined to find the worst script, a terrible director and a lousy cast to guarantee the show closes on opening night.

The cast has many costume changes, which in of themselves generate much amusement. If you’re not missing lines because you’re laughing so loud, check your pulse.

The many stunning as well as funny costumes were brought to the stage by a talented team lead by Diane Kaplan and Mary Calder.

There are so many funny scenes. Max’s investors are rich elderly widows whose sexual fantasies he fulfills to get them to invest in his shows. Their tap dance scene with walkers is side-splittingly hysterical.

The playwright of “Springtime for Hitler,” Franz Liebkind, played by Michael Falzon, is amusing is his own way, from his animated pigeons to his amusing devotion to Adolph.

Kimberly Elliot’s effervescence and stage presence as Ulla makes her a standout character. She is as beautiful as she is talented.

The stage crew, led by Loretta Bullock and Chuck Bollman work their magic to keep the show moving quickly amid the many scene changes.

It may seem over-stated, but the show is seriously funny. I predict that after the first weekend the next three weekends will sell out, based on word-of-mouth reviews and return attendees.