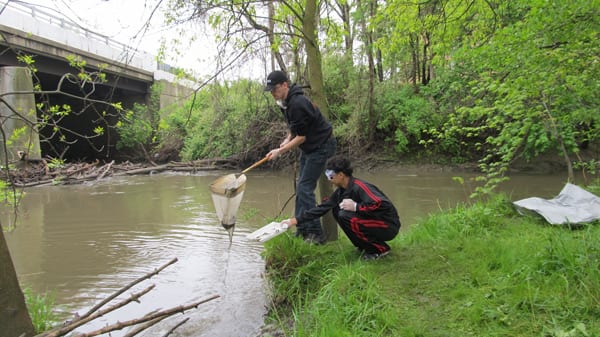 Photo by Sue Suchyta
Edsel Ford High School seniors Erik McCreless (left), 17, and Shaher Salem, 18, take a sample of sediment and river water May 1 from the Lower Rouge River at Colonial Park in Inkster to check for benthic macro-invertebrates. The bottom-dwelling river animals without a backbone and large enough to be seen without magnification tend to stay in the same habitat and are indicators of local changes in the water quality.

“I think any time you can do science hands on it’s a great experience for the kids,” Haddad said. “I think they learn it better.”

Haddad is an Edsel Ford High School biology teacher and faculty advisor for the Green Club, a group promoting environmental responsibility through energy conservation and pollution reduction. She and Robert Harrison, who teaches advanced placement biology and environmental science at EFHS, took 48 high school students to survey, sample and study the Lower Rouge River May 1 at Colonial in Inkster.

By taking part last week in the Rouge Education Project with more than 3,000 other Southeastern Michigan students living throughout the Rouge River watershed, they helped the non-profit Friends of the Rouge monitor river health by testing the water, identifying the presence of river bottom invertebrates impacted by water quality and surveying stream bank erosion and water velocity.

Emily Hughes, program manager for the REP, said students do chemical tests on river water on site to detect dissolved oxygen, turbidity (the particles suspended in the water), phosphates (which can cause algae overgrowth), pH and nitrates, which can wash into rivers from fertilizer and human and animal waste; elevated levels can indicate water contamination.

Hughes said the second part, biological sampling, has students looking at aquatic insects living in the river. She said the number of species they find reflects the health of the river.

Thirdly Hughes said students survey physical aspects of the river, like its slope, how eroded the banks are and how much debris is present.

Hughes said students use test kits similar to ones government agencies use.

“It’s really sophisticated equipment,” Hughes said. “It’s not just a test strip or a little tablet or something like that. And then for the bugs they are actually sorting through sample pans full of debris to find these tiny insects, so it’s actually very meticulous work.”

She added that students practice testing water samples in the classroom before doing them in the field.

Chester Marvin, a board director for Friends of the Rouge, has been with the organization since its inception since 1986, when it formed to raise awareness. He said in the past 25 years local students have helped make the Rouge one of the best monitored watersheds in the United States.

Harrison said his students are excited to be out in the field after spending time in the classroom learning about watersheds and water quality.

He said he thought it was fitting that his students learn to assess the quality of the water that flows through the Rouge River since they live in its watershed.

“It’s a great experience for them to actually see what it is we’re talking about,” Harrison said. “Actually get in the water. But to actually be out in the field and using some of the skills that they’ve learned in the class I think is just beyond compare.”

Junior Nicholas Toupin, 16, who is in both the A.P. biology and environmental science classes as well as Green Club, said both he and his classmates are excited to be out in the field, and it is the first time he has had a chance to take samples from the Rouge River.

Toupin said he felt people should not pollute their watershed the way they do.

“I think awareness is really important because I don’t think people know exactly how awful we’re treating the Earth,” Toupin said. “This is a good way to spread awareness to some of these people who might not know about what’s going on.”

Rachael Sawicki, an 18-year-old senior, said she is glad that their river testing data can actually be used to measure pollutants and make the Rouge River environment better.

In addition to fertilizers and sewage polluting river water, she believes that the soap from people washing their cars has a negative impact on water pH.

Sawicki said the Rouge River was dirtier than she expected it.

“There was actually a tire in there,” she said. “It’s kind of gross.”

Thomas Schwartz, an 18-year-old senior who also noticed the contamination in the river, said it makes field sampling much more relevant to him.

“If you go down this stream you’ll see all kinds of rags and nasty things,” Schwartz said. “I thought there would just be trash but I didn’t expect it to be this dark brown color and that kind of shocked me.”

Hughes said she likes talking with students about their observations and with those want to study environmental science in college after finding field work more exciting that classroom learning.

“They come out here and they become aware; they’re like ‘Wow, this is what school can be and this is really interesting,’” Hughes said. “So getting kids out of the classroom and into an environmental setting is really, really important.”

Haddad said her students in the Green Club, who are already environmentally aware, find the Rouge Education Project important to them as well.

“They want to know what the (Rouge) quality is, if it’s getting better, which it is,” Haddad said. “And… they want to be a part of… making things better around here.”