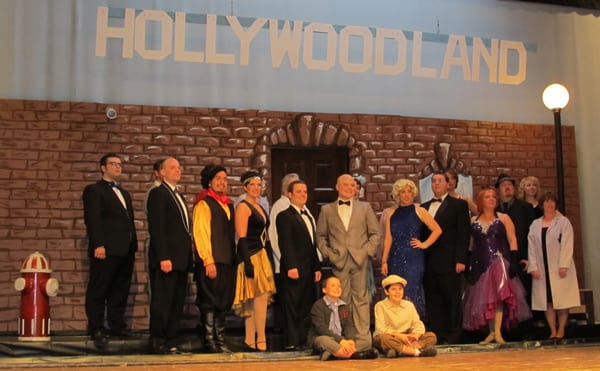 Photo by Sue Suchyta
The Southgate Community Players present “Singing in the Rain” at 8 p.m. Friday and Saturday at Davidson Middle School, 15800 Trenton Road in Southgate. The show, which opened Friday, was directed by Christopher Rollet, with choreography by Tina Brow and music direction by Rich Adler. For more information, go to www.scponstage.com.

By SUE SUCHYTA
The Southgate Community Players will present “Singing in the Rain” for one more weekend at 8 p.m. Friday and Saturday at Davison Middle School at 15800 Trenton Road in Southgate.

The show, which opened Friday, is directed by Christopher Rollet. For more information, go to www.scponstage.com.

When the talkies hit the movie theaters in 1927, the silent film stars had to adapt or perish. When one silent screen beauty, Lina Lamont, turns out to have an awful voice, the studio decides to dub her voice with that of an unknown stage actress, Kathy Seldon. However, Kathy and Lina don’t like each other, and Don Lockwood, Lina’s on-screen leading man, has fallen in love with Kathy.

The show features the familiar songs, “Make ’Em Laugh,” “Good Morning,” and the iconic title song “Singing in the Rain.”

Alexis Mosley, 21, of Allen Park, who plays Lina Lamont, said it is a wonderful show, with a lot of the storyline taken directly from the movie.

“It’s stuff you’ll love and stuff you’ll know,” Mosley said. “And there’s also a bunch of unique stuff that’s unique to this production that it’s fun to see what we can do with it.”

She said the show’s rain effect is achieved through piping that runs above the stage, and predicts audiences will enjoy the Don Lockwood’s “Singing in the Rain” musical number that closes the first act.

“I absolutely love watching our Don Lockwood every night,” Mosley said. “And a lot of it is straight from the movie so it is stuff you’ll know and you’ll love.”

Mosley said her role, Lina Lamont, is fun to play, even though the other characters all make fun of her onstage persona.

“It’s fun being somebody totally different for a night, and she gets a song in the stage show, so it’s fun,” Mosley said.

Lina’s song, which is in Act II, is the aptly titled, “What’s Wrong with Me?”

Joshua Beurer, 23, of Allen Park, who plays Cosmo Brown, said that although many people know the movie, not as many get to see the show live.

“Even though the movie is so iconic, you just can’t beat the energy of seeing it live on stage,” Beurer said. “And I think that Southgate attracts a unique group of people; we all bring our unique talents to the show, so we’re all giving you the story you know and love, but we’re putting our own little spin on it.”

He said his favorite scene is the number, “Make Them Laugh.”

“I just love jumping around and acting like a complete idiot,” Beurer said. “It’s great.”
Rian McDonald, 27, of Southgate, who plays Don Lockwood, said he’s wanted to play the character since he was a little kid and he’s doing his best to bring life to the Gene Kelly character from what is one of his favorite films.

He said while it is difficult to follow in Gene Kelly’s footsteps, he’s been tapping for a long time.

“I’m very familiar with the steps and I grew up watching the film and that’s the whole reason I got into tap to begin with,” McDonald said.

“The fact that we are actually using real rain is I think my favorite part of the show,” he said. “It’s not glitter coming down from the ceiling or funny lighting – it’s actually rain falling from the ceiling, so it’s going to be a lot of fun to watch.”

Lara Keathley, 31, of Southgate, who plays Kathy Selden, agreed that the rain that happens on the stage is phenomenal.

Music director Rich Adler said they do a pretty accurate correlation between the stage show and the movie.

Adler explained that the songs weren’t written for the movie, explaining that they were just songs that had been popular for 20 or 30 years that were chosen to be used in the show.

He also explained that the show is different from typical stage musicals since, in following the movie, the singing is sometimes followed by a long dance break, which isn’t the norm for a stage show.

He said that is fun for the orchestra, who can “cut loose” during the dance number, since they normally have to tone down their sound to avoid overwhelming the singers in a number.

He said it’s not a breakthrough movie musical where the songs advance the plot, but is more of a story where they wrote it, then picked out songs to throw in because they needed a song at that point in the show.

“They have a thing where they are trying to teach them proper diction and they use a tongue twister and the tongue twister turns into a song, the ‘Moses Supposes,’” Adler said.

He said they use similar plot manipulation to get a tap number into a scene with a plot about the French Revolution.

He said the play was written about 35 years after the movie, which came out in 1952.

He said that Lina, actually has a song in Act II of the stage play.

“My theory is that they actually put that song in to make Act II a little longer,” Adler said.

He encourages people to come out and support community theater.