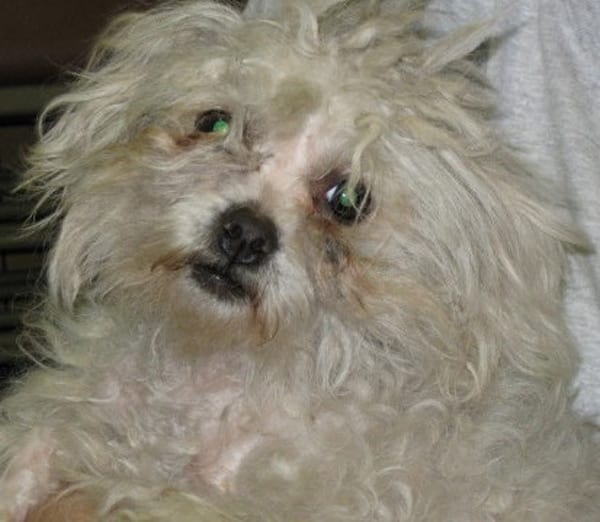 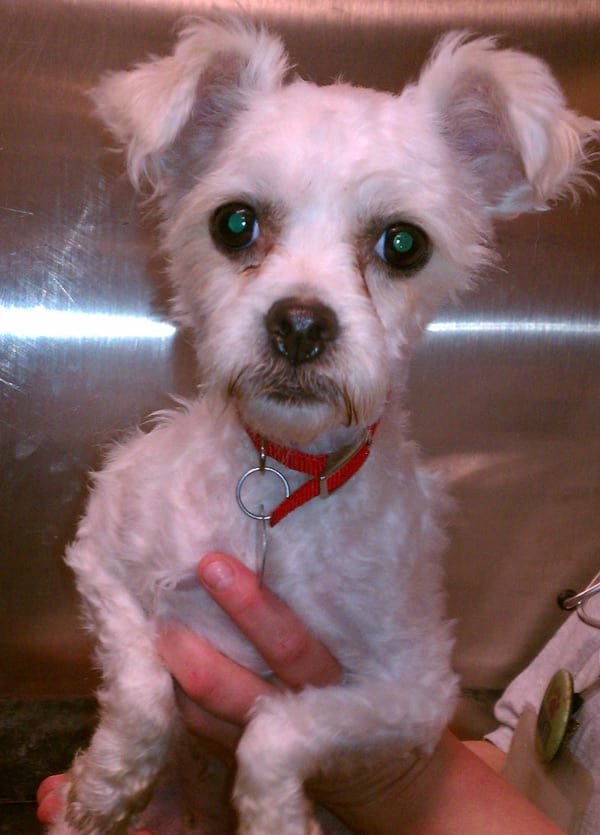 By SHERRI KOLADE
Times-Herald Newspapers
DEARBORN – Cassandra Edmondson was outraged after watching a news story in late April about a dog abandoned in Dearborn. But instead of flipping the channel, the Southfield resident got off the couch and did something about her rage.

Edmondson adopted the little poodle she saw on the news named Angel, a white dog with big eyes and cuddly personality — the kind that melts your heart, Edmondson said.

Angel was found inside a box in her own fecal matter, with matted hair in poor condition.

“I was very angry and sad to hear her story,” Edmondson said. “My heart tore out to animals like that.”

Angel is one of eight dogs abandoned in Dearborn since September 2011 along Schaefer Road between Michigan Avenue and Ford Road.

The dogs — all similar in breed and size and in poor condition — have been dropped either in pairs or individually around the same area in Dearborn every month except for January and March, Elaine Greene, executive director for the Dearborn Animal Shelter, said. In mid-April, Angel was picked up.

“The first dogs came in about eight months ago,” Greene said. “At that point we didn’t think anything of it but it seemed like every month or every couple months later we would get a dog that looked similar to the other dogs we were finding in the same area … then we kept our eye on it.”

All of the dogs have since been adopted.

Police reported the a many of the dogs were found with skin problems, matted hair, and some hair loss. A few had long nails. Greene added that none of the dogs had collars, tags or microchips.

Typically the animals were picked up by Animal Control after someone spotted them and called the police. The animals were then taken to the Dearborn Animal Shelter where they were vaccinated and some were treated for skin conditions, Greene said.

“They were brought up to health and we found homes for them,” she said.

Green said the police speculate the dog-dumper could be a person who had a litter of puppies and couldn’t take care of the animals anymore.

“It is just unusual that dogs so similar in appearance are found in the same area in such a short period of time,” she said. “If there is someone that is breeding dogs … we are not aware of it and we have not gotten any reports of the situation.”

Police have no suspects as of press time. Greene encourages people who might have animal troubles to look into better alternatives.

Greene suggested if animals have behavioral issues, the pet owners should contact an animal shelter or location that offers training for the animals.

“The Dearborn Animal Shelter is always here to help people with their animals,” Greene said. “So if they are having animal issues don’t hesitate to call us and we have people that can help with behavioral issues and other types of support issues.”

If individuals want to give their animals away and the shelter may be closed, they can call the police department, Greene said.

Greene is also calling for citizens to keep their eyes peeled for any suspicious behavior regarding the dog dumping because the act puts animals and people in danger.

“For whatever reason people can’t care for their animals they should contact their local animal shelter and have (the shelter) help them place the animals humanely, not put them out on the street,” Greene said.

“What we are hoping for is getting the story out there and someone may know something and let us either help the person or put a stop to what is going on.”

When Edmondson saw the news story on Angel in late April, the only thing she could think about was adopting Angel. It was a nagging from deep within that she couldn’t ignore, she said.

“Something said ‘track her down,’” Edmondson said. “I said ‘Aww I want her’ and I tracked down the animal shelter.”

The animal shelter was closed that day so Edmondson went the next day and filled out and application to adopt Angel, and she was not deterred even though one person already had an application on file.

Edmondson adopted Angel on May 3. Edmondson said Angel was shy at first around the house, but now her family is tripping over Angel because she wants to be in the middle of everything.

To report suspicious activity of animal abandonment in the area call the Dearborn Animal Shelter at 313-943-2697 or email the Shelter at [email protected] with information.