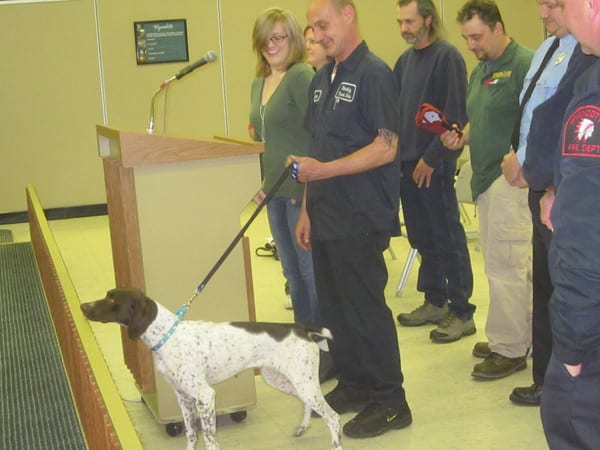 Photo by Andrea Poteet
Anna Heinbokel (right) and her uncle, Bruce Donaldson show Heinbokel’s dog, Layla, who Wyandotte Firefighter Jeff Prisza (not pictured) pulled from a fire April 7. The dog recovered after two days in an animal hospital but coughed up smoke for a few weeks.

By ANDREA POTEET
Sunday Times Newspapers
WYANDOTTE – Two city employees were honored at a city council meeting Monday night for going above and beyond the call of duty during recent structure fires in the city.

Firefighter Jeff Prisza and Municipal Services Employee James Sneed were recognized for their actions during fires in March and April.

Sneed received commendation for his actions during a March 28 fire in the 480 block of Cedar. Sneed, who was working in the area, saw the smoke billowing out of the house and woke up the sleeping resident, dragging him out of the house before firefighters arrived.

“He should be recognized more than even us,” Fire Chief Jeff Carley said. “This is what we do. But he was able to discover the fire, notified us, and was able to lend assistance and aid the homeowner from the structure prior to our arrival.”

Sneed said he did what anyone else would do under the circumstances.

“I didn’t do it for the honor,” he said. “I just did it to help someone else. I hope that someone would help me out if I were in anything like that.”

The homeowner was not injured in the fire and Sneed has not met him since, but said he hopes he’s “doing great.”

Prisza was awarded for saving a family’s dog from an April 7 blaze in the 7200 block of Third Street.

The 2-year-old English pointer, named Layla, was kenneled in the basement while Scott and Karie Heinbokel and their adult daughter, Anna, were away from the house. An uncle, Bruce Donaldson, alerted firefighters to the dog’s presence and Prisza pulled her from the house before giving her his oxygen mask.

The dog stayed at a local animal hospital for two days where she recovered from smoke inhalation.

“She was coughing a lot,” Anna Heinbokel said. “Her breath smelled like smoke for a few weeks. Everytime she coughed it was like a puff of smoke.”

The causes of both fires were ruled undetermined.

Mayor Joseph Peterson said he’s proud to have a Fire Department committed to saving animal – as well as human – life.

“They realize it’s still a life,” Peterson said. “That’s what our firefighters do, save lives.”