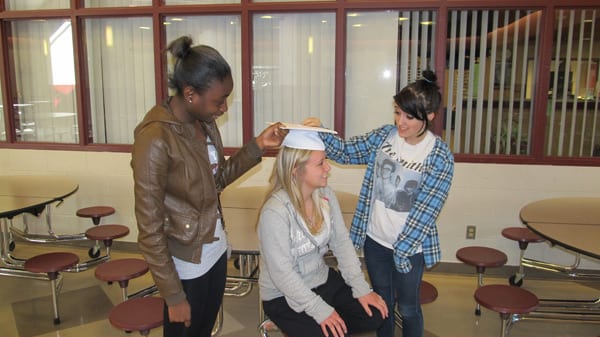 By SUE SUCHYTA
Sunday Times Newspapers
SOUTHGATE – As if being a teen wasn’t tough enough, some local high school seniors have overcome adversity and are graduating in June, having turned negatives into positives and wounds into wisdom.

At Southgate Anderson High School three girls have found strength within themselves to keep themselves on track to graduate June 6 despite the death of family members, uncertain home situations and other obstacles that many adults – let alone teens – would find daunting.

TAJHANE’: DON’T GIVE UP
Sleep is often a luxury for teenager Tajhane’ Clark, 18, of Ecorse, who is often up past midnight and awake before dawn.

After working her after-school job at MacDonald’s on Fort Street in Southgate until 10 p.m., getting home to Ecorse by 11 p.m. and then to bed by midnight, high school senior Tajhane’ Clark, 18, is up again at 6 a.m.

She catches a 6:30 a.m. SMART bus to get from Ecorse, where she lives with her mother, to Southgate Anderson High School before 7:51 a.m. for her first class.

Clark, who enrolled at Southgate Anderson as a junior through the schools of choice program, said she’s moved a lot in the last few years and has lived in different family members’ houses, which disrupted her schooling.

She said the SMART buses do not always arrive on time or at all for her 50-to-60 minute bus ride.

“I’ll just be standing there, waiting in the cold, or the rain or the snow,” Clark said. “It seems like it takes forever.”

Clark said the last few years have been “a rocky road.” She said despite having limited free time (she does homework during classes and on work breaks) between school and work she tries to keep herself positive and focused and prays every day.

She said she tries to “go with the flow,” but looks back daily to see what she can do better the next day.

In August Clark plans to move to Kansas City, Mo. to live with a cousin who attends the University of Missouri while she attends Metropolitan Community College to begin her studies to become a registered nurse.

Clark became interested in nursing when she helped her grandmother, a Type 2 diabetic who died Nov. 28, with her insulin shots.

She said she draws spiritual support from her church, Mount Zion Missionary Baptist in Ecorse, and from a friend who urges her to overcome obstacles when others say things are beyond her reach.

She said she even becomes motivated when people give up on her.

“It makes me want to work harder, to believe in myself… that I have no choice but to do it,” Clark said. “Because where will I go in life if I don’t succeed?”

KASYERA: JUST KEEP GOING
Like Clark, Kasyera Kowalczyk learned to draw on her inner strength to overcome obstacles that stood between her and her goals.

After being in a physical altercation with her alcoholic mother, who was her custodial parent for about six years after her parents’ divorce, Kowalczyk, now 18 and a high school senior, said she learned that things don’t stay bad.

Though senior year is when many start thinking about the “real world” outside of the shelter of high school, for Kowalczyk, that growing up process happened at a much younger age.

Her mother, her custodial parent, started drinking more, and Kowalczyk found herself running the household.

“I was 13 years old and making sure bills got paid,” Kowalczyk said. “I was making sure we had groceries, and electric was on, water was on, I was running the house. I was cleaning, I was cooking… I was doing all of that at 15.”

Kowalczyk said she no longer has direct contact with her mother, whom her older half-brother, 31, and a half- sister, 26, support.

She said went to therapy for a year after she went to live with her father, but hated it and stopped going.

She said she moved in with her father Dec. 6, 2009, halfway through her high school sophomore year, and on April 20, 2010 her father officially received custody of her.

She is enrolled at Baker College in Allen Park for next year, and said she hopes to transfer to the Center for Creative Studies in Detroit. She said some day she would like to have a photography studio and gallery in Chicago.

She said her motto is simple.

BRANDY: LIVING WITH LOSS AND WALKING FOR A CAUSE
High school senior Brandy Rast, 17, also knows what it is like to have her life turned upside down.

The second Sunday in May was emotional for Rast, who lost her mother to breast cancer last year on May 7, the day before Mother’s Day.

Her mother was diagnosed with breast cancer in December 2009 when Rast was a sophomore at Southgate Anderson High School. Her mother went through chemotherapy and radiation therapy, which Rast said made her really weak.

Rast is living with her stepfather now to finish high school. She plans to live with her father next year when she enrolls in Bowling Green State University in Ohio to study nursing.

She said she’s become stronger whether she wanted to or not because even though people have been supportive, she doesn’t have her mom there to do things for her like many of her friends do.

She said that few people know how weak and sensitive she is inside.

“When I’m around people I try to be as strong as I can,” she said. “But when I’m at home by myself, I just lose it. It’s difficult.”

Rast took part in the 2011 Making Strides against Breast Cancer Walk Oct. 15, 2011 on Belle Isle in Detroit and raised almost $600 — nearly double her $300 goal for breast cancer research. She walked the 5 miles around Belle Isle with her grandparents.

“I had a lot of fun and I felt good because I helped raise money for a good cause to cure breast cancer,” Rast said.