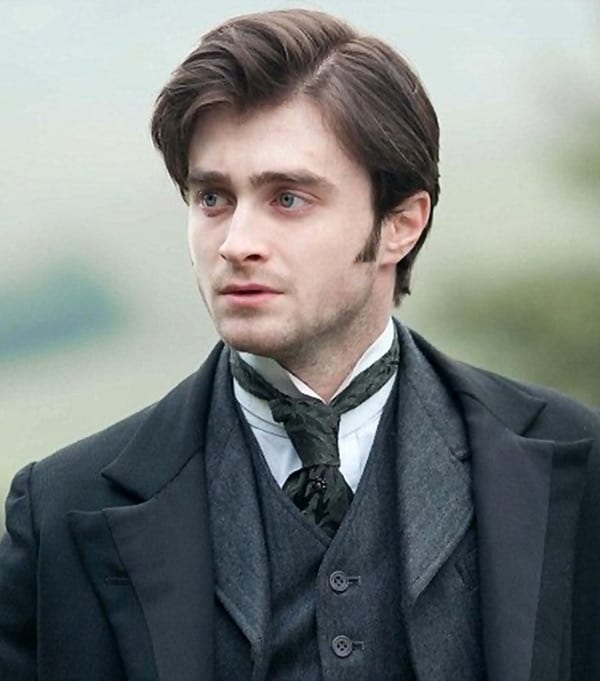 Daniel Radcliffe in “The Woman in Black.”

PICKS OF THE WEEK
“The Woman in Black” (PG-13) — In a misty corner of England, a grieving man must sort through paperwork in clearly the most haunted house in the village. This is the kind of chiller that takes its time, relies on tried-and-true techniques, and builds an atmosphere of fear and uncertainty. Lawyer Arthur Kipps (Daniel Radcliffe) must sort through the estate of a small town’s recently deceased crazy lady. When Arthur starts seeing a woman in black and hearing voices, the villagers have nothing to say to him.

This is Radcliffe’s first leading role without a magic wand, and he does well enough to prove that he can stay alive post-Potter. He pulls it off as the grief and anxiety-stricken man trapped in a 1960s-style scary movie.

“This Means War” (PG-13) — Chris Pine and Tom Hardy play two CIA agents who are super-cool, deadly, handsome and super best bros for life. When they both fall for Reese Witherspoon, they decide to put their invaluable skills to work sabotaging each other’s dates. It’s a silly plot pushed to its most-Hollywood extent — lowbrow humor and action sequences in a romantic comedy that’s light on the romance.

If you can’t handle the cheese-factor in the film, it can cause physical discomfort with its lack of chemistry and low-hanging quips. However, if you have an itch to see a movie that moves along at a good pace and features secret agents shooting each other in the groin with air rifles, “This Means War” could save the evening.

“Red Tails” (PG-13) — The Tuskegee Airmen have a proud place in American history, and “Red Tails” tells the story like it was written for a B-movie. The Airmen became the first African-American pilots in U.S. armed forces during World War II, and one of the most decorated units of the war. Somehow, this comes across as boring and generic in “Red Tails,” a movie so loaded with corny speeches that you would think it was running for student body president.

“The Secret World of Arrietty” (G) — This Japanese animated feature is the kind of family entertainment you wish you could have known as a rugrat. Arrietty is a 14-year-old girl, and one of a secret race of tiny people who live in the cracks and recesses of the human world. Arrietty gets discovered by Shawn, a normal-size human boy, and a secret friendship forms. The animation is top-notch. The characters, colors, action scenes — all of it just looks amazing. The film is a beautiful, gentle story with enough splendor and juice to keep you pulled in.