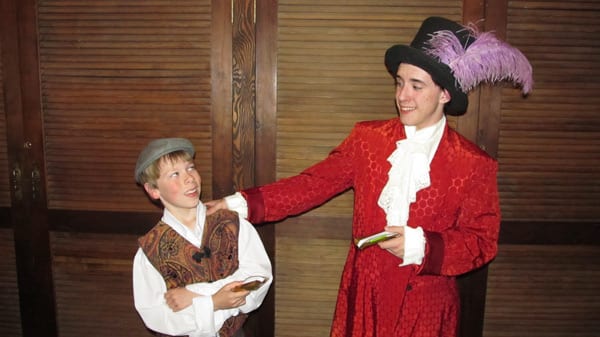 Photo by Sue Suchyta
Dearborn residents Peter Moore (left), 10, as Charlie Bucket and Nathaniel Booth, 16, as Willy Wonka star in the Roald Dahl musical “Willy Wonka Junior” July 20 to 22 and 27 to 29 at the Players Guild of Dearborn. For more information go to www.playersguildofdearborn.org.

By SUE SUCHYTA
A chocolate fantasy and an edgy rock musical will take to local stages this summer as casts were announced for “Willy Wonka Junior” at the Players Guild of Dearborn and “Rent” at the Southgate Community Players’ Corner Playhouse.

CHOCOLATE DREAMS
The Guildlings, the youth arm of the Players Guild of Dearborn will present, “Willy Wonka Junior” July 20 to 22 and 27 to 29 at the theater, at 21730 Madison, southwest of the intersection of Monroe and Outer Drive in Dearborn.

The score features the familiar songs, “The Candy Man,” “Pure Imagination,” “Oompa Loompa” and “I Want It Now.”

Valerie Haas of Inkster will direct the show, with musical direction by Carmelle Atkins of Canton, choreography by Christie Schauder of Dearborn and co-produced by Greg Viscomi of Dearborn and Tim Carney of Livonia. Dianne Kaplan of Dearborn will chair costumes.

Haas said the show will have some fun choreography elements, such as a big “Candyman” number, and another with the younger children as squirrels in the nut room. She said both numbers will use lots of children in many different ways.

“We’re trying to make it as fun as possible and using those fantastical elements,” Haas said. “Roald Dahl was a genius when it came to having kids portrayed as not just ‘people in waiting,’ – like until they grow up they don’t do much or think much.The children in Roald Dahl stories are so much (more).”

Haas said she was pleased to see so many young actors return from last summer’s Guildling production, as well as many more newcomers auditioning than she has ever seen before.

“I think that’s really great that we’re getting new people into the Guild — not just the kids, but their parents as well,” Haas said. “And that’s really what we’re trying to do here, is connect with the community and to build future theater-goers. Not just performers, which is great, too, but theater-goers who will come to see theater, appreciate theater, and understand theater because they have done theater as children, and that’s our main goal.”

Nathaniel Booth, 16, of Dearborn, and a sophomore at Edsel Ford High School, will play Willy Wonka, a role that he said suits his zany personality.

He said he is looking forward to working with the young children who play the Oompa Loompas.

“I love little kids,” Booth said. “They’re so fun. They’re so full of energy and they can make people laugh and not even try, because they don’t know they’re trying … they’re just very free and moving.”

Charlie Bucket will be played by Dearborn resident Peter Moore, 10, a student at Divine Child Elementary School. He said he was shocked when he heard he had been cast as Charlie, because he thought the biggest part he might get would be Mike Teavee.

He said he thinks he’ll have the most fun as Charlie working with all of the other actors.

He plans to encourage his friends to attend the show by telling them how entertaining the show is to see.

“I think it will just be a thriller,” Moore said. “It’s one of those shows that is always fun to come to … it’s a fun show.”

The cooks are played by Michael Nelson, 15, of Dearborn; Hailey Terry, 15, of Lincoln Park; Maria Lazzarino, 14 of Westland; Amanda Berger, 16, of Livonia; and Gabby Nail, 12, of Oxford.

The edgy rock musical won the Pulitzer Prize for Drama in 1996, as well as four of the ten Tony Awards for which it was nominated: best musical, best book of a musical and best original score, with the Tony for best performance by a featured actor in a musical going to Wilson Jermaine Heredia for his performance of Angel Dumott Schunard.

“Rent,” which is based on Giacomo Puccini’s opera “La boheme,” follows a group of impoverished young artists and musicians struggling to survive and be creative in New York City’s Lower East Side while living under the shadow and constant worry of HIV and AIDS.

The cast includes Rian McDonald, 27, of Southgate as Roger; Amy Bos, 29, of Detroit as Maureen; and Ypsilanti residents Andy Burt, 31, as Mark, and Holly Knick, 22, as Mimi.

Joann will be played by Lara Keathley, 31, of Southgate, with Lucas Ramon, 18, of Dearborn as Angel. Joseph Williams, 20, of Taylor will play Benny and Nick Rapson, 22, of Canton will play Collins.