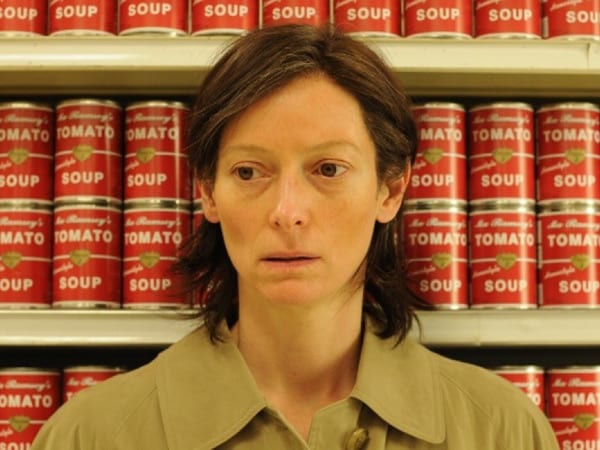 Tilda Swinton in “We Need to Talk About Kevin.”

PICKS OF THE WEEK
“Man on a Ledge” (PG-13) — A man stands on the ledge of the 21st floor of a hotel, but his goal isn’t to jump. No, it’s a far more convoluted plot in which disgraced ex-cop Nick Cassidy (Sam Worthington) says he’s out on a ledge to prove he’s not the diamond thief everyone thinks he is. Already we have the key ingredients to a lukewarm thriller: a story built around a suspense-building gimmick and gem thievery.

While Worthington stands out there talking to the police negotiator (Elizabeth Banks), a young couple (Jamie Bell and Genesis Rodriguez) are pulling a high-tech heist. The movie fails to build much suspense, as the audience knows that Worthington is going to be on a ledge until the other plots advance far enough to give us the twist.

“Coriolanus” (R) — Ralph Fiennes directs and stars in this bold adaptation of one of Shakespeare’s plays. The lines are the same, but the setting has been updated to a modern landscape of urban warfare. Caius Martius (Fiennes) is a Roman war hero who comes home with a thousand-yard stare. His mother, Volumnia (Vanessa Redgrave), pushes him into politics, but the people of Rome reject Caius as a warmonger. Caius then teams up with his nemesis, Tullus Aufidius (Gerard Butler), to take revenge on Rome.

Fiennes just radiates that he “gets” Shakespeare and wants others to see it the way he does. He also understands that a war movie needs heart-pounding action. The characters speak in iambic pentameter about the state of Rome, but the adaptation plunges the material into our world — where war, politics, human nature and public opinion collide just like they always have.

“We Need to Talk About Kevin” (R) — Imagine if your first child just plain hated you since the day he was born. Tilda Swinton plays a woman who puts her dreams aside to start a family, then gives birth to a son, Kevin, who is just impossibly cruel and creepy. Kevin’s father (John C. Reilly) is an affable sort who just doesn’t see it. This movie is unsettling. Rather unsettling. You might remain unsettled after the credits.

“Goon” (R) — Seann William Scott plays Doug, a bouncer who wishes he had something to be proud of. In a chance encounter at a minor-league hockey game, Doug leverages his only skill — punching people — into a career as a professional on-ice bruiser. This lowbrow sports comedy is genuinely funny for those who can handle the violence. You can’t help but love Scott’s true-blue underdog, misguidedly trying to impress his family one fistfight at a time.