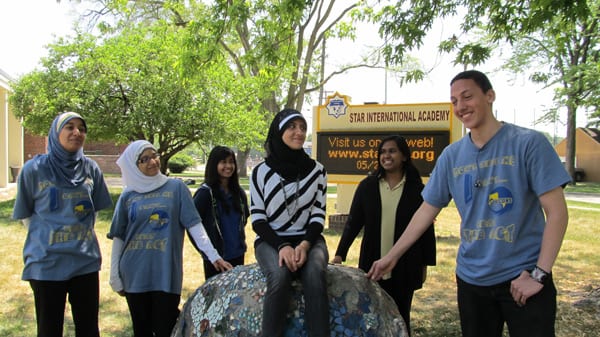 By SUE SUCHYTA
Sunday Times Newspapers
HEIGHTS – Most high school students expect history homework to be about people and events that happened long ago. Several students at Star International Academy got to take part in it.

For some students the Dearborn Heights-based academy, a public school that focuses on the study of international cultures, their history homework became winning entries in the in the April 28 Michigan History Day Finals.

One student wrote about revolutionary protests in Egypt in which he took part. Two other groups qualified for the national competition: one with a video describing the racism American Muslims face in the aftermath of 9-11, another with a web site including eye-witness relative accounts of the revolution that created Bangladesh.

The two groups who qualified at the state level competition for the National History Day contest, which will be held June 10 to 14 in College Park, Md, have begun raising funds and accepting sponsors for their trip to the national competition.

TURNING A FAMILY VACATION INTO A DOCUMENTARY
When junior Abdelrahman Shoaib, 16, of Detroit, heard about the 2012 National History Day theme, “Revolution, Reaction and Reform in History” he committed to creating a documentary about the political protests in Egypt just three days before he left Michigan for a family visit to Egypt from late November 2011 through New Year’s Day.

He said if anyone had told him during the height of the protests in Egypt during January 2011 that he would be there protesting at the end of the year, he said he would have never believed them.

“I was excited because I got into two, three protests,” Shoaib said. “I got to experience how the experience was, what people’s ideas were really, not just what the media said… I got the personal feeling of being there.”

One protest was for women’s rights, and another was against the ruling military power that was there at that time he said, adding that despite some scuffles they were mainly peaceful protests. Accompanied by an uncle, he took photos and video footage at the protests he attended.

The people protesting conditions in Egypt serve as a reminder to the government that they are there as public servants, Shoaib said, and the public is not there to serve them.

Shoaib, who hopes to post his documentary online soon, said that a “revolution until victory” is still ongoing in Egypt.

Shoaib’s documentary, which was recognized at the state level as the best entry in the senior division using family history, will not advance to the national competition.

DOCUMENTING THE POST 9-11 RACISM AGAINST MUSLIMS
While Shoaib was protesting conditions in Egypt, Juniors Tahany AlSabahi, 17, of Dearborn, Marwa Abdelmaguid, 15, of Detroit and Zunaira Tufail, 16, of Canton were documenting and creating a documentary exposing the post 9-11 racism against American Muslims.

They took second place at the state level in the documentary senior division March 28 at Central Michigan University in Mt. Pleasant. They plan to post their documentary on YouTube after the national competition so other teams don’t see it beforehand.

The title was chosen, Abdelmaguid said, because since 9-11 they have noticed how American Muslims have been viewed and treated differently, often in a negative manner.

Dearborn resident AlSabahi said the city’s large Muslim population insulates women who wear the hijab or head scarf, but as soon as she is 30 to 40 minutes away from home – even as close as Westland – she starts getting stares.

Showing another side of American Muslims in their documentary in an attempt to counter what Tufail said is often a negative portrayal in the media is one of their goals.

They hope their video will be an eye-opener for people of other cultures, Tufail said.

“Not many people know about the racism that’s going on,” AlSabahi said. “They see what happens on the news but it’s distant from them – they don’t have Muslims that live in the same neighborhood as them… from watching our video and looking at the judges’ expressions some of them were very surprised at the vulgar things that people would say about Muslims. If those are educated people that are surprised, what can it do to the population as a whole?”

The team members also said they are glad that they choose a topic that was both controversial and timely.

BLOGGING THE BIRTH OF BANGLADESH
While the post 9-11 documentary team wrote about modern day racism against Muslims, the other team created a web site about the revolution that formed Bangladesh, and the more violent racism that took the lives of millions of Muslim civilians in Eastern Pakistan during that war.

Because the student team members grew up learning how revolutions in the United States and Europe positively influenced social change, sophomores Malak Kabalan, 15, of Dearborn and Areeba Haider, 15, of Canton were stunned to hear that the United States did not support the revolution in East Pakistan before it became the new nation of Bangladesh.

Kabalan and Haider (plus a third student whose name was withheld at their parent’s request) gathered firsthand accounts of family members as they created a website documenting the 1971 revolution that brought about Bangladesh.

A lot of the information about the formation of Bangladesh, Haider said, is new to people in the United States and contains information they haven’t learned in their history books. She learned about the revolution from her Bengali father, who was just a year or two older than her during the Bangladeshi Liberation War of 1971.

Under former President Richard Nixon and Secretary of State Henry Kissinger in 1971 the group learned that the United States feared Soviet expansion into Southeast Asia, especially into India. Nixon and the United States government, who were politically aligned with Pakistan, initially felt the revolution was an internal matter for Pakistan. When India and Bangladesh defeated Pakistan nine month later, the Soviet Union recognized Bangladesh several months before the United States.

One section of the group’s web site explains how then U.S. Sen. Edward Kennedy addressed the U.S. Congress about the crisis in East Pakistan after he visited the region. Kennedy told Congress that millions of civilian Bengalis were killed by Pakistanis using U.S. military aid (including guns, tanks and aircraft) in violation of negotiated agreements.

A audio and written transcription of a session in which Kissinger advised Nixon about the millions of people in East Pakistan who could die of starvation, and of the millions of refugees who could flood India, further increasing tensions in that politically sensitive region were included, Kabalan said.

Bagladesh is more than typhoons, natural disasters and corrupt politicians, Haider said, and hopes people learn from their web site that the country is so much more. She said Bangladesh is just like any other country that wants to get ahead and hopes other countries will look beyond those stereotypes.

The region’s distinct cultural identity added to the tensions during the liberation war, Haider added.

The group took second place in the web site category in the senior division at the state level in March 28 at Central Michigan University in Mt. Pleasant.

While it is still a relatively young and struggling country, Kabalan said her research showed that Bangladesh is trying to build itself up as a nation to be successful, and they hope their web site conveys this to viewers.

The biggest misconception that Haider hopes people in the developed countries can overcome is the image of Bangladesh as an impoverished country relying on charity to exist.