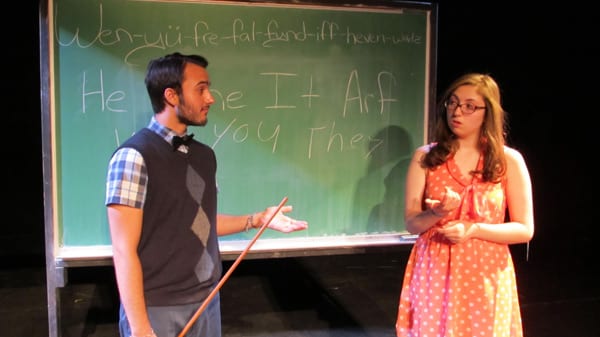 Photo by Sue Suchyta
David Ives’ “The Universal Language,” student-directed by Courtney Butterfield, is about one language to unite the world – but it isn’t really that simple. The cast includes Randall Nicholls (left), 19, of Allen Park as Don and Amanda Chahine, 19, of Dearborn Heights as Dawn. The Henry Ford Community College One-Act Festival will run June 14 to 17 and June 21 to 24 with Thursday through Saturday shows at 8 p.m. and a 2 p.m. Sunday matinee. For more information call 313-845-9817, contact theater faculty member Gerry Dzuiblinski at [email protected] or go to www.hfcc.edu.

By SUE SUCHYTA
From classic comedy to murderous mayhem, Henry Ford Community College will offer two weeks of one-act plays June 14 to 17 and June 21 to 24 at Adray Auditorium in the MacKenzie Fine Arts Center.

While it won’t feature Shakespeare’s immortal words, it will treat playgoers to an original score composed for the show by faculty member Anthony Lai.

Performances will be at 8 p.m. Thursday through Saturday, with 2 p.m. Sunday matinees. For more information call 313-845-9817, contact Dzuiblinski at [email protected] or go to www.hfcc.edu.

MAKE THEM LAUGH: COMEDY SETS THE STAGE
The One-Act Festival will open with four short comedies performed the first weekend.

John Stern’s “Caramels,” set in the 1930s and student-directed by India Jackson, tells the tale of a family man who decides to quit his job so he can stay home and eat caramels and read poetry all day. When his wife, daughter and mother-in-law all try to shake him from his worrisome ways, his sweet tooth ultimately casts a deciding vote.

Highgate said people will like the show because they can relate to the family: the carefree husband and the nagging, concerned wife. He said the humor is in the exaggeration.

Peeples added that there is irony in that the lead character who is indulging in candy is actually a dentist, and it is tooth problems that pull him out of his short-term sabbatical.

George S. Kaufman’s “The Still Alarm,” student-directed by Timothy Pollack, is a one-act comedy about upper class buddies who can’t motivate themselves to leave their hotel room despite the fact that the hotel is burning down.

The cast includes Jamie Pappas, 26, of Wyandotte as Ed and Ali Kazan, 23, of Dearborn as Bob Barkley. Jason Burke, 35, of Frenchtown plays a firefighter, as does London Johnson, 30, of Detroit. Darian Thomas, 18, of Detroit plays a bellhop.

David Ives’ “The Universal Language,” student-directed by Courtney Butterfield, is about a man who proposed one particular language to unite the world – but his idea isn’t really that simple.

The cast includes Randall Nicholls, 19, of Allen Park as Don and Amanda Chahine, 19, of Dearborn Heights as Dawn.

Chahine said her character is a clumsy, nerdy girl with a stutter who is looking for a way out of being made fun of every day. Her language teacher is actually teaching her a scam, which she doesn’t realize at all. She said part of the fun is saying the words of the ridiculous language that she is learning, providing farcical moments between the two characters.

Nicholls describes his character has someone trying to get a new language into usage – a language that turns out to be totally fake and a scam.

The two actors in the show said they have found Italian, Arabic, Spanish, French, German and Polish words in the play’s imaginary language.

Chahine said her character becomes more confident while the con artist begins to feel some remorse, adding that watching their characters transition was fun.

Louis Phillips’ “Car Wash,” student-directed by Samantha York, is a comedy about a car wash where vehicles enter but never reappear. The cast includes Starsha Varner, 20, of Wayne as Darlene; Kamrad as Saltenpfeiffer; and Dominic Lomuscio, 20, of Dearborn Heights as Joe.

Lomuscio said the show is funny with no real resolution, leaving the audience hanging and guessing. The back and forth banter as welling as the blocking make the play humorous, Lumuscio added.

Lai’s original score is an anticipated addition to the show.

Pollack, 20, of Wyandotte will play Macbeth while York, 21, of Dearborn will portray Lady Macbeth.

Also playing lesser witches are Jackson, 19, of Detroit; Butterfield, 23, of Redford; and Varner.

York, who studied the play in high school, said that playing the character without speaking the traditional lines Shakespeare penned for her character was a challenge at first. However, she said she loves playing the dark and villainous character, and playing the role through movement only has provided her with a challenge.

A lot of the exaggeration comes through body movement and how she moves about the stage, she said, adding that the casts’ facial expressions are as real as the actors can make them.

“The way that Gerry has taught us to move and portray emotions through no words at all is wonderful and it’s a great technique to use in other pieces whether we’re talking or not,” York said.

She plans to portray the character’s powerful and arrogant presence that dominants the character until Lady Macbeth starts to feel guilty about what’s she done.

York said the audience should be able to understand it from beginning to end.

“I’m happy to be in my third show now here at Henry Ford and to finally be able to show everyone the talent I have without having to use words,” York said.