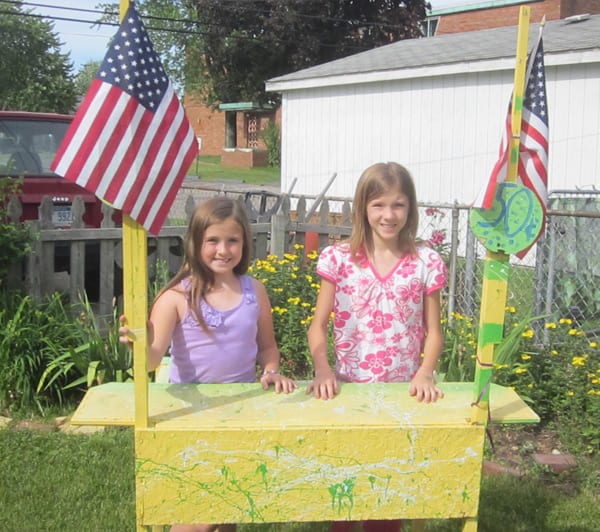 Selling a helping hand
Photo by Andrea Poteet
Rebecca (left) and Karalyn Amison show off the lemonade stand from which they will sell their pink lemonade with proceeds going to Shelter to Home outside the shelter, 266 Oak, Saturday.

But Wyandotte residents Karalyn and Rebecca Amison are taking that motto a step further, turning lemonade into charitable contributions and business know-how.

Through Huntington Bank’s annual Detroit Lemonade Day the girls will join thousands of other children in southeast Michigan Saturday to develop and run their own lemonade stands, to learn business and math skills and give something back to their communities.

With the motto “keep a little, save a little, give a little,” Lemonade Day participants strive to divide their proceeds between their saving accounts, a charity of their choice, and an item to splurge on.

Karalyn, 9, and her sister Rebecca, 11, plan to divide proceeds from their “Kitty and Pink” pink lemonade stand in front of Shelter to Home 266 Oak, equally between the shelter, their bank accounts and a to-be-determined gift to themselves.

The girls adopted their two cats, Dr. Jeckyl and Mr. Hide, from a nearby shelter, so helping the new shelter, which opened its Wyandotte branch in March, was second nature, they said.

“I figured they needed supplies,” Rebecca said. “They are still kind of new.”

For the girls, giving back is nothing new. Both have sold Girl Scout cookies and Karalyn is growing her hair to donate it to children with hair loss for the second time in a few years.

Last year, they started their own lemonade stand and donated the proceeds to Precious Animal Welfare Society after their mother, Kelly, saw coverage for Lemonade Day on the day of the event, too late for the girls to participate. Using a stand constructed by their father, Don, they raised $40 for the group.

“It makes me feel excellent,” Karalyn said of her decision to donate to animal welfare groups. “Cats are amazing.”

For Kelly Amison, her daughters’ involvement in the project will do more than benefit neighborhood cats. It will teach her daughters valuable lessons about business.

“I hope they learn math skills,” Amison said. “They learn it in their school books. Now, they can see a practical application.”

From their stand last year the girls learned lessons like making sure they have cash on hand to make change and having more lemonade than they think they’ll need so they don’t run out. They also learned that they can make a difference.

“I’m very proud,” Kelly Amison said. “They’ve tried to rescue any birds or stray cats in the neighborhood. With this, they can do more.”