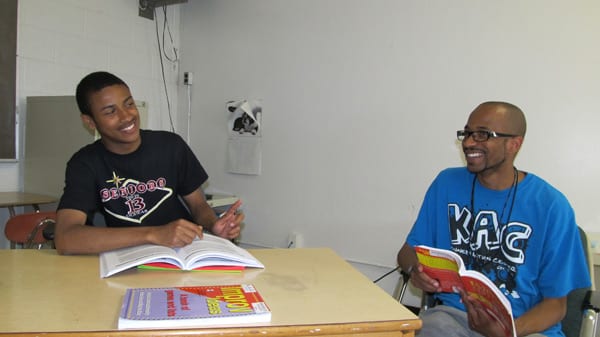 Bowens, a junior, has taken part in the Wayne Metropolitan Community Action Agency’s academic enrichment activities for the past three years, spending time with friends while he has fun with cooking, arts and crafts, field trips and drama club.

Carla Chinavare, director of WMCAA’s school age programs, said they apply for grants in districts with a high need, particularly those with a high percentage of free and reduced price lunch applicants to increase the likelihood of receiving government funding for programs.

While the high school program funding has been renewed, she said with less government funding available they are still waiting to hear whether the middle school programs in Taylor will be renewed at the end of June.

“What the programs essentially provide is a great opportunity for kids just to be kids,” Chinavare said. “It’s recreation. A lot of these kids cannot afford dance lessons, cooking lessons, have never been to the Tigers game, never been to the zoo. So we kind of give them those opportunities.”

A lot of the children are talented musically, she added, but are in school districts that have cut music programs, and their parents may not have money for music lessons or transportation to drive them to lessons.

High school students may spark an undiscovered talented, she said, like cake decorating, photography or robotics, so it’s a good opportunity to provide services for the students in partnership with the school districts, who keep their doors open in the summer and provide space for the programs.

If he weren’t in the summer program, Bowens said he would be at home doing nothing and not applying himself.

“You learn stuff you never learned before here,” Bowens said. “like how to cook certain things you never would have cooked at home, and you learn to try new things, and it’s really a good experience to have.”

From the program,he also matured and grew as a person, he said.

While third year program staff member and drama instructor Michael Bouey said he considers himself more of a “big kid” than a serious role model, he said he takes on the roles of big brother, mentor and parent to the teen program participants.

Working with the teens at Kennedy is something Bouey, who helped some students produce their first music video last summer, enjoys.

Witnessing the excitement the students shared with their friends and families when they shared their original music video left a lasting impression on him, Bouey said.

“It meant the world to them,” Bouey said. “It made us closer and it really put a smile on their faces.”

Connecting with an adult mentor in the program, especially one who is a good listener, like Kennedy site manager Alyssa Tumolo, is important to Daisy Coleman, a 16-year-old sophomore who said she had fun participating in last summer’s program.

“People are nice here,” Coleman said. “They give you opportunities to do stuff, fun free-flowing things, and the activities are fun and creative.”

Cooking – especially learning how to make Oreo cheesecake – was one of her favorite activities, as were making bags, hats and flip flops, she said. She said an outing that combined camping, canoeing and barbecuing – as well as throwing rocks in a lake — was her favorite field trip.

“It’s a lot of fun stuff to do instead of just being bored at home,” Coleman said.

Tumolo is glad that students like Coleman have chosen to stay with the program, and was pleased to see some of the sophomores who were among their original Kennedy program participants graduate from high school this year.

The economy has made the program even more important, Tumolo said, since many of the summer jobs that used to keep kids busy and out of trouble are no longer out there. She said with the support of the program staff at Kennedy the student participants are more likely to succeed.

“They just need somewhere to go and someplace to be where there are adults that care about them and their friends,” Tumolo said.

While their grant covers up to 50 students in the summer program at Kennedy, she said in the past they had one day with three students but many more with 35 or more students showing up.

“I hope that this is something that continues to happen for years to come for students because it’s so valuable and it’s so life-changing for them,” Tumolo said.

The benefits of the after-school and summer programs to the teens extend beyond the life and homework skills, Chinavare said.

“I hear that time and time again – what a turn-around story,” Chinavare said. “We see a lot of changes in attitude, which makes… the staff feel really good.”

Twelve years ago when she started at WMCAA right out of college Chinavare never thought she and their staff would positively affect this many kids.

“I always laugh and think, ‘Who stays at their first job?’” Chinavare said. “I’m so proud to be a part of this organization. This… is what I started out doing… and to see the growth… to year after year see the number of kids that we’ve served, I can’t believe it.”