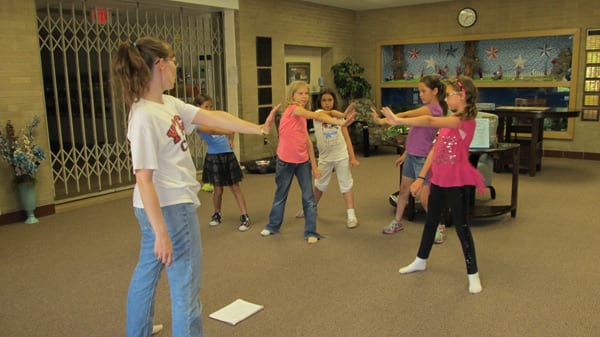 By SUE SUCHYTA
The Dearborn Heights Civic Theatre and a stage-full of fairytale folk will put the Big Bad Wolf on trial July 13 to 21 during “The Big Bad Musical – A Howling Courtroom Comedy.”

The show, which features a book by Alec Strum and music and lyrics by Bill Francoeur, will be performed by the summer youth theater contingent, with 58 children and teens in the cast.

Director Cynthia Frabutt of Dearborn said the show is a comedy with humor on multiple levels, with adult humor that will appeal to the young at heart.

The show has a cast of 58 children, Frabutt said, some who are 8 and under, on the stage for the first time and who are playing favorite fairytale characters.

“They have a line from that fairytale character, and they’re dressed up,” Frabutt said. “It’s just using their imagination and creative play.”

The music is really good, she said, and the children have a chance to learn choreography and work with a musical director.

Many Dearborn High School students are in the cast who were in either last summer’s DHCT production of “Really Rosie” or “The Female Odd Couple” at DHS, she said.

“The Big Bad Musical” is shorter than last summer’s “Really Rosie,” she said, and she is double casting many of the principal roles.

Westley Montgomery, 17, of Dearborn, plays one of the double cast roles, a shepherd who testifies against the Big Bad Wolf, who is on trial throughout the play. Montgomery, who will be a senior this fall at Dearborn High School, testifies on behalf of The Boy Who Cried Wolf when their sheep were stolen by the Big Bad Wolf.

He said adults will enjoy the humor.

“The whole concept of a Big Bad Wolf being on trial is funny and the concept is geared toward adults in one way, but the kids will love it because of the storybook characters that they all know,” Montgomery said.

The Evil Stepmother and the Fairy Goodmother have lines with a lot of humor that adults will appreciate, he said.

Each audience member will vote as a juror to determine the outcome of the trial, Montgomery said, and the cast must be prepared to deliver one of three different endings at any given performance.

He said the song and dance numbers range from big company numbers, to the wolf and his backup dancers, to solo numbers.

For a relatively unknown play, he said it is appealing to the cast and expects it to appeal to audiences.

The show is as fun for the teens as it is for the younger children, he added.

“It’s definitely fun,” Montgomery said. “The little kids have their part of it that they enjoy and then we have our part and we do completely different levels of singing and dancing and acting, so I think it is interesting and a challenge for all of us.”

Lindsey Culp, 17, who also will be a senior at DHS this fall, agreed that the show is really interesting, fun and appeals to the whole family.

“It’s a fun way to tell a fairy tale,” Culp said. “There are three different endings, so the audience gets to vote of what they think should happen to the Wolf.”

She plays a reporter, Sydney Grimm (in a double cast role), whom she said is biased against the Wolf.

Cindy Grimm, another reporter which is also a double cast role, is played by Marissa Campitelle, 15, of Inkster who shares the role with another actress. Campitelle plays a bailiff during other performances.

The audience vote will determine one of three outcomes, she said – whether the Wolf is guilty, innocent or the voters in the audience are deadlocked in a tie, which she said means they could play different outcomes during consecutive performances.

She said the cast of children and teens is very talented, Cynthia Frabutt is a talented director and the show is “marvelous.”

“The music is great, Laura (Tyler) is a great choreographer and it’s going to be so exciting,” she said. “The audience getting to decide the ending is going to be really exciting.”

The play has lots of laughs and drama, she added.

Emily Robinson, 9, of Dearborn, who plays one of the Wolf’s entourage, likes her role because she said she doesn’t have to take the position of being against the wolf. She said she’s told her friends and neighbors that the show’s twist makes it worth seeing.

Canton Township cast members include Sophia Tyler, 10, as a Wolfette and Margaret Tyler, 16, double cast as the Fairy Godmother and as the Snow Queen; Garden City resident Madalyn Walentowicz, 5, is cast as the Little Mermaid; Inkster resident Marissa Campitelle, 15, is double cast as Cindy Grimm and as the bailiff; and Livonia cast members include Aiden Bressler, 8, as the Beast (from Beauty and the Beast) and Garrett Bressler, 5, as Jack Be Nimble.