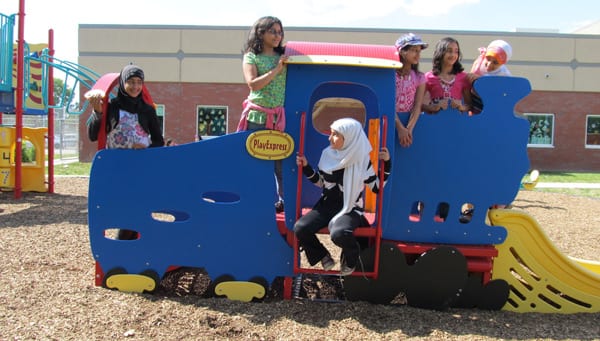 “I think that Summer Academy was really interactive and you got to make new friends,” Musid, who will be a seventh-grader at Salina Intermediate School in the fall, said. “You learned how to do new stuff… and had fun field trips.”

ACCESS Summer Academy provides Musid and other students with a creative, safe and fun environment in which they can develop socially, intellectually, physically and emotionally.

For ACCESS, which has offered recreational summer youth programs for more than 30 years, the summer of 2012 will be the tenth year literacy and math programming made possible by grants from the federally-funded Michigan Department of Education’s 21st Century Community Learning Centers, CCLC.

The grant, first received in 2003, allowed ACCESS to expand their summer program and add the academic portion to it Sarah Shoucair Chaar, academic enrichment coordinator for youth and education, said.

Research has shown that students who review during the summer what they learned during the school year retain it better, Chaar said.

“Without that, students who did not review anything during the summer they really start… getting behind in the beginning of the school year,” Chaar said. “So adding the academic portion to our recreational summer camp was really crucial.”

The ACCESS Summer Academy is operating June 18 through July 19. Chaar said ideally they would start in July and end in August closer to the beginning of the school year.

The morning programs are academic, with certified teachers and tutor facilitators in the classrooms.

“Students are engaged with hands-on activities, project-based learning,” Chaar said. “Disguised learning – so we definitely want to make sure we keep it fun.”

In addition to trying new afternoon activities like crocheting and go-karting, Musid said the summer morning literacy and math activities made the following school year easier, and that her schoolwork improved.

Noelle Sufyan, 12, who will be a seventh grader at Salina in the fall, said she liked meeting new friends from different schools at the ACCESS Summer Academy.

Riding go-karts for the first time at C. J. Barrymore’s was her favorite field trip activity, she said.

“It is fun and it doesn’t let us forget what we learned in school,” Sufyan said, who said she got all As on her school report card after attending ACCESS’ Summer Academy.

Musid also said her school work was easier and she improved a lot. Both she and Sufyan said they decided during the summer program that they wanted to become doctors.

C. J. Barrymore’s Entertainment Center in Clinton Township was the favorite field trip of Deena Fadah, 11, who will be a seventh-grader at Lowrey Middle School in the fall. She said the bumper boats, go-karts and trampoline-like Euro bungee apparatus were her favorite activities.

Loola Qassen, 11, who will be a sixth grader at Woodworth Middle School in the fall, tells friends not yet in the summer academy that while they have fun field trips, they also learn at the same time. She said the teachers make learning fun.

“If we’re in math they make it a game,” Loola Qassen said. “Like dividing, they have two kids, and they put a problem and they have to solve it… whoever gets it first gets a point.”

She said she used to have a hard time with division but now she can do the problems quickly, acknowledging that it had a positive impact on her school work.

Along with her sister, Saidha Qassen, 8, (who will be a third-grader at Miller Elementary School in the fall) Loola Qassen, who has been in the summer program for three years, said she has recruited some of her school friends to join them in the summer as well.

“I tell them they have swimming and field trips,” Loola Qassen said. “And they make learning fun and my friends can come… and no one’s mean to you.”

Saidha Qassen said she is happy that she can get help with her school work and that her reading has improved during the summer session. She said she likes reading the Jenny B. Jones and Geronimo Stilton mouse books.

The programs that the girls enjoy are made possible by the 21st CCLC grant designed to target low-income areas and sometimes low-performing schools, or schools with language barriers, where English is a student’s second language, Chaar said, adding that English as a Second Language, ESL students often need the most help.

“The students that come from immigrant families they don’t really have the opportunities to put their kids in… high quality enrichment programs,” Chaar said. “Their parents are working all the time and… the parents don’t know the resources around them because of the language barrier. So this definitely makes a big difference with our immigrant students.”

The largest population served is students in kindergarten through fifth grade, but they do serve students through twelfth grade, Chaar said. She said that the first enrollment priority for the summer program goes to the 21st CCLC students who have been enrolled in the after-school programs.

ACCESS also hosts summer teen enrichment programs at their youth and education building for ages 13 to 17, offering classes in finding a summer job, cupcake decoration, team sports (soccer, baseball and volleyball), college opportunities, community service and team building, make-up application, digital photography and blogging, and model race car design and build. This is the first time they have had a program for teens that is just enrichment.

She said they also do a lot of leadership training with older students.

“All of these things really prepare them for after high school,” Chaar said. “To be confident… to go get a job, to be confident to go to college… that is what they really need right now.”

Students who were in the 21st CCLC grant programs as fourth- and fifth-graders now come back to ACCESS and volunteer to be part of the youth leadership programs, Chaar said.

ACCESS focuses on high quality programs, Chaar said, emphasizing that they are not just a place where people can drop off their children for free child care.

“It’s a place where our staff is highly trained,” Chaar said. “Every single activity that we do is well thought out. There’s an outcome to every activity. There’s going to be a lot of free play, which is awesome, but when it comes to academic and enrichment activities we want to make sure that there is always a reflection and an outcome to what the students are doing.”

Chaar said she loves her job.

“The best part of it is being with the kids,” Chaar said. “Riding on the bus with them, and getting to know them more, or being in the classroom and observing how the kids are learning. The best part of it is I want to make sure… that these kids at the end of the program say to their parents (and) say to themselves, ‘This has been the best summer ever.’ And when we hear students say that I think we’ve achieved a lot.”