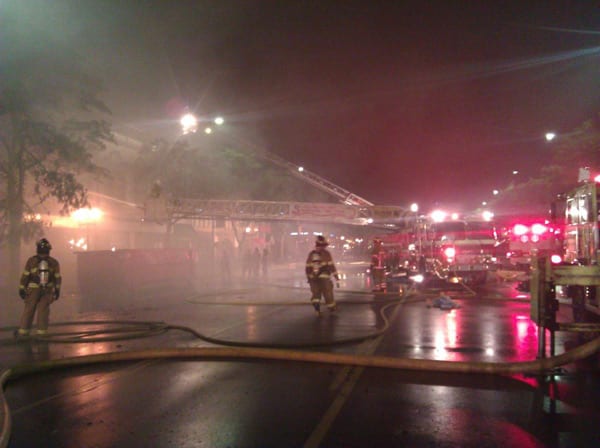 By ANDREA POTEET
Sunday Times Newspapers
WYANDOTTE – Officials here are thanking police and fire personnel from throughout the area for their work in fighting a fire that claimed Lions, Tigers and Beers June 10.

Wyandotte Fire Chief Jeffrey Carley visited Monday’s City Council meeting to thank the approximately 100 firefighters who responded to the blaze at the restaurant, 2929 Biddle, about 7 p.m. that day.

The Detroit Fire Department Fireboat pumped water from the Detroit River to help fight the flames that left the popular sports bar and restaurant which opened in 2006, a “total loss.”

“Without their assistance and the mutual aid pacts we signed, we would have lost a whole lot more than 2929 Biddle,” Carley said.

Firefighters contained the flames within the restaurant, which sits in a historic block of closely-situated buildings, but neighboring businesses, including a lawyer’s office and Bella Donna’s bridal gown shop, sustained smoke and water damage.

Many of the shop’s dresses for upcoming weddings had to be sent out for cleaning and some had to be stored in neighboring businesses, Mayor Joseph Peterson said.

The roof of the restaurant, famed for always playing “The Wizard of Oz,” on one of its TVs, collapsed, according to published reports.

No injuries were reported, all patrons were evacuated and the fire is still under investigation. The restaurant employed about 41 people.

Carley was out of town as of Wednesday and could not comment further on the fire, a Fire Department office representative said.

At the same meeting, councilors approved a request by the restaurant’s owner, Brian Sollars, to use the sidewalk in front of his business for sales during the city’s annual Street Art Fair, scheduled for July 11 to 14. The request was approved for the agenda prior to the fire.

“Hopefully by that time at least they can use the sidewalk and try to make a dollar,” Councilman James DeSana said. “I’m sure insurance works awfully slow.”