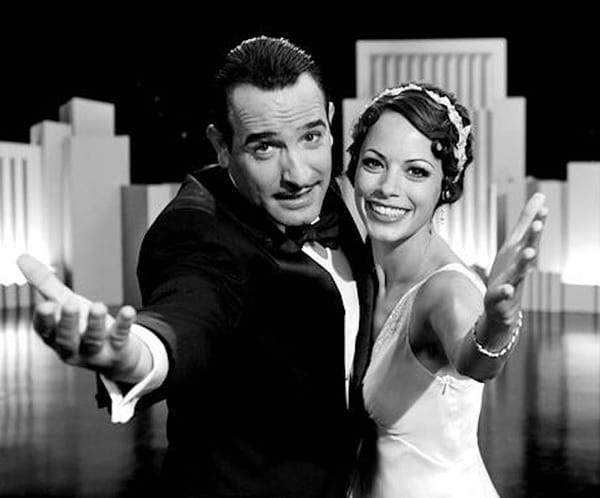 Jean DuJardin and Berenice Bejo in “The Artist”

PICKS OF THE WEEK
“The Artist” (PG-13) — Yes, this is the silent one. A movie that came out last year was made without sound or color, and then it brought home five Oscars, including best picture and best actor. It’s natural to suspect it of being a high-brow snoozefest — it’s a silent film that came out in 2011, and yet all the critics love it. But there’s nothing inaccessible about it; it’s just an earnest, old-fashioned movie that entertains.

Set in 1927, George Valentin (Jean DuJardin) is the biggest star on the silent-movie scene just as talkies are about to take off. While his career loses momentum and starts to fall, young actress Peppy Miller (Berenice Bejo) starts her climb to the top.

“Mirror Mirror” (PG) — The wicked queen (Julia Roberts) is a wildly vain woman who spends her kingdom into financial trouble, apparently by investing all the nation’s wealth on elaborate costume design for her and the court. Snow White (Lilly Collins) is pretty in face and bland of personality, but manages to catch the eye of the wealthy young prince (Armie Hammer.)

Director Tarsem Singh injects every frame with vivid color and elaborate designs. The visual flair isn’t enough to make the story shine, however. But don’t worry, if you still want a visually stunning retelling of Snow White, Hollywood has another one just around the corner.

“21 Jump Street” (R) — Loosely (very loosely) based on the ’80s TV drama of the same name, this film knows it has a dumb premise, and uses that as comedy fuel. A police department that’s run out of original ideas (wink) decides to recycle an old idea by putting two youthful cops undercover in a local high school to break up a drug ring that’s targeting the kids.

Channing Tatum and Jonah Hill play the cops, Schmidt and Jenko. Hill’s character still has some resentment over the way he was treated in high school, and Tatum’s character is surprised to find that in modern-day, upper-middle class schools, the jockish bully isn’t guaranteed instant popularity like they were in the ’80s (or at least ’80s teen movies.) It’s an irreverent comedy that keeps up the pace with quick laughs.

“Wrath of the Titans” (PG-13) — Just like its 2010 predecessor, “Clash of the Titans,” this computer-generated myth movie has a lot of swords and not much of a script. Sam Worthington returns to the role of Perseus, the half-human son of Zeus (Liam Neeson.) Perseus is called back into action when Hades (Ralph Fiennes), Ares (Edgar Ramirez) and Kronos (a CG blob of talking lava) team up to kidnap Zeus and set loose the Titans — the old gods who are somehow meaner than the ones on Olympus.