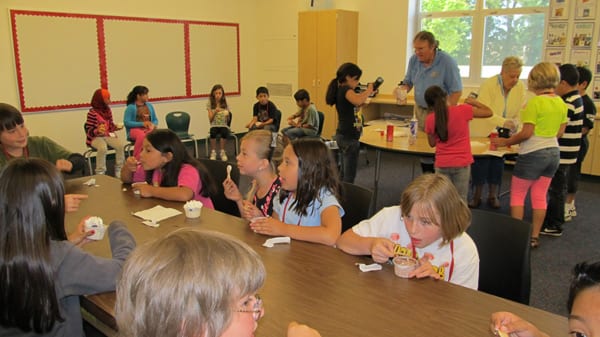 The Allendale Elementary School third grader said a Super BUG is “when you do your goals and you help other people.”

The Melvindale Kiwanis provide the BUG, or Bringing Up Grades program, for Allendale Elementary School’s third grade classrooms to help students learn to set goals, establish good study habits and improve their grades. Super BUGs are students with all As who are good roles models and help classmates reach their learning goals.

During Allendale’s introduction to BUGs in the second half of this school year, half of the third graders, about 89 of the 178 students became BUGs, with 14 becoming Super BUGs, Melvindale Kiwanis volunteer C. Sue Herman said.

Herman said the Melvindale Kiwanis had to set a goal themselves to get the program approved and into the teachers’ hands by the second half of this school year.

“We have wanted to do it for years – it’s a Kiwanis-branded project,” Herman said. “But it was very difficult to get in because there’s a lot of planning involved, and this year rather than going directly to the principal, which we tried, or the vice principal they had us talk to the third grade teachers, and they really ran with it. They were so excited about it.”

Student goal setting, Herman said, sold the teachers on the program, as did awards for the students who met their goals that the teachers did not have to plan and administer.

According to the national Kiwanis program description, the low-stress program design encourages students to improve their own performance without competing against their classmates.

The program also gives students who missed their goal during their first card marking a chance to improve and try again during the next card marking.

Nathan Wallace, 8, said by setting a goal to do better at math he now knows math is both “awesome and important.” He said by setting goals to learn math better he could give the right change to people if he works in a store – that is, if his first career choice of working in the NFL does not work out.

Christian Ochoa, 9, said he also set a goal to do better at math because he wants to become a math teacher. He now studies more and goes online to learn things.

Shanaya Clark said her brain is the secret to her newfound success in math.

“I spent more time doing homework and every (problem) I got wrong I practiced until I finally got it right,” she said.

Alexandria Garavaglia, 9, set even higher goals for herself: she said she tried to get As in all her classes. She said through the program, she almost achieved that goal, earning As for the first time in her writing, science and social studies classes.

Her mother, father and classmates helped her reach her goals, she said, adding that she also has learned to “focus and never give up.”

Robby Griffith said he also has set a goal to bring up his grades, especially in reading and spelling. He said he is studying harder, paying attention in class and studying his spelling test words at home. He said reading a “Diary of a Wimpy Kid” book is helping his reading skills improve.

Melvindale Kiwanis volunteer Jeannine Ansley wishes the program had been in place last year so a young relative, who is a grade ahead of the inaugural BUG group, could have been able to benefit from the program.

“She struggled so hard in third grade. When I heard about this program I knew we had to do it,” Ansley said. “We had to help the kids.”

She said this year they initiated the program through the teachers – they have not put a mentoring program in place yet, but plan to do that next.

She said they plan to meet with the teachers to set goals for next year’s third graders earlier in the school year.

Kiwanis volunteer Mary Berry said the group is proud of the third graders who helped them launch the BUG program at Allendale this year.

“I hope they keep it up and I hope other children will follow their lead and do the same,” Berry said.

“The teachers just said to me that they could see with our involvement from the outside community that they can see a difference in the attitude of the children and that they feel more empowered, that they can affect their own change,” Herman said.

She said she made a presentation to the Dearborn Kiwanis Club, and that they are very excited about starting a BUG program.

Herman, who will be a lieutenant governor for the Michigan Kiwanis next year, said she met with the incoming governor for Kiwanis and he wants five new BUG programs in the state next year.

“What we want is (the students) to say ‘I can do it’ rather than ‘I can’t’ so that they can feel they are in control,” Herman said.