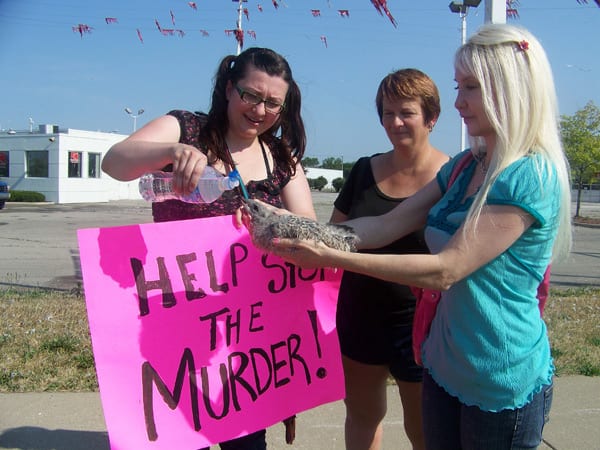 By JAMES MITCHELL
Sunday Times Newspapers
SOUTHGATE — The flock of seagulls that claimed squatter’s rights at a vacant car dealership on Fort Street stirred up the community last week.

Business owners concerned about this weekend’s Cruisin’ Downriver wanted the birds gone, and public safety officials said the number of birds posed a threat to the community’s health.

After several attempts were made to evict the seagulls, a volunteer task force on Thursday shot and killed between 200 and 250 birds.

On Friday, animal supporters protested the shootings, and said they planned to challenge the city to find a more humane solution.

Cheryll Robertson said she was concerned that the dramatic step was taken when other solutions could likely be found, and planned to organize a petition drive to prevent any further shootings.

“This was their solution, the highest degree of animal cruelty,” Robertson said.

Robertson said she understood that the birds continuing to congregate would only increase in population — an unknown number of baby birds were among the seagull community — and that the public health issue needed to be addressed.

A petition may not be necessary. Southgate City Administrator Brandon Fournier said that the extreme steps taken Thursday were done after several attempts failed, but that the city does not expect any more shootings.

Before a state permit was requested and guns were drawn, the city tried chasing the birds out with sound, relocating nests and driving a small convoy of plow-fronted trucks to send the birds flying. Each attempt ended with the flock returning home to roost.

“We didn’t want to resort to this,” Fournier said. “The problem continued to compound and a public health issue grew more prominent.”

City officials said that the birds were likely first attracted to the area when the Fort Street construction project unearthed acres of fresh dirt. An estimated 500 birds took advantage of the vacant Saturn of Southgate lot and buildings, establishing nests and becoming fixtures that threatened to pose a health and safety risk, particularly during the weekend car event.

A new business, Michigan Vehicle Solutions, is expected to begin restoration work soon at the site, and Fournier said the company paid for clean-up crews that were at work Friday. The city sought advice from the Department of Natural Resources and federal agricultural officials, and will continue working to send the birds elsewhere without any additional gunfire.

“Along with the property owners we are using additional, non-lethal methods,” Fournier said. “We do not anticipate using any more force.”

Fournier said the officers who responded Thursday were volunteers with the Downriver SWAT team.