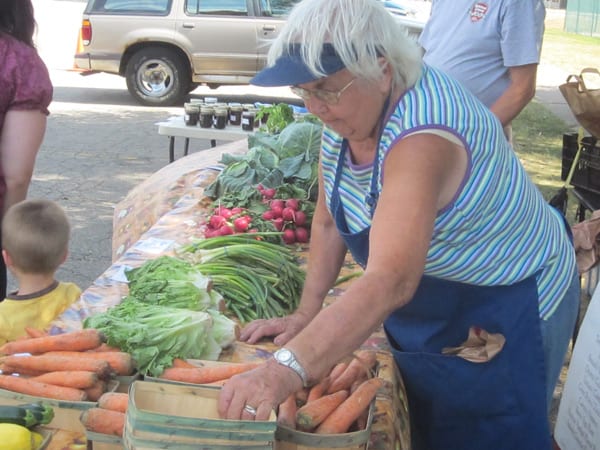 The market, in its first year, brings crowds to a lot next to the city’s swimming pool on Oakwood Boulevard Wednesdays from 2 to 7 p.m. for products ranging including fresh eggs potted flowers and herbs and snacks from local restaurants.

“We just wanted to bring more people out, offer a few different things,” David said. “Outside of their Melvindale Days, they don’t have a lot of family events.”

The market also fills other needs, David said. By accepting Michigan Bridge cards, the market provides easily-accessible fresh vegetables to residents, three-quarters of which are on household food assistance programs.

“It’s a big bonus to the Melvindale residents,” David said. “We can get those people out so they can use their (Bridge) card on fresh produce.”

And there’s plenty of produce – as well as other finds – to be had. With an average of seven vendors per week selling honey, candles, jams and baked goods next to tables filled with fresh produce and local restaurants like Las Cazuelas offering chips, salsa and guacamole, there’s no shortage of variety for shoppers. David said she’s visiting other farmer’s markets to scout vendors for Melvindale’s market, which runs through September.