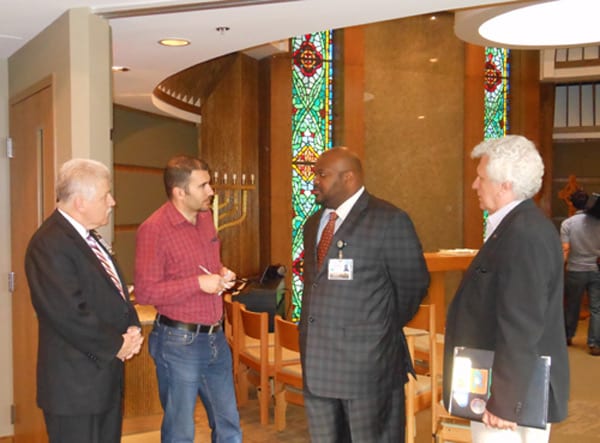 DEARBORN — The Sanctuary at Oakwood Hospital & Medical Center — in honor of Frank C. and Mary T. Padzieski continues to provide a example of diversity, cultural acceptance and tolerance.

For the second time, journalists from overseas filmed the inter-faith sanctuary and talked with Oakwood faith leaders about the facility, which was funded entirely through donations. The journalists came from Ankara, Turkey, on a grant from the U.S. Department of State as part of a series of programs about Muslim integration in the U.S., said Alan Botto, senior producer director with the U.S. Office of Foreign Broadcast Support. Botto had previously escorted a television crew from Bahrain to visit the hospital when the sanctuary was still under construction.

“We were impressed with the project even back then,” Botto said. “To see it complete is especially gratifying. It’s a beautiful space.”

The project to expand the chapel at OHMC and make it a place where people of all faiths can feel comfortable dates back several years to the realization that the existing chapel was too small and that it was important to embrace the diversity of patients, staff and the community.

The late Frank Padzieski, who founded the original chapel in honor of his wife, Mary, served as the honorary chairperson of the fundraising campaign that collected the $1.2 million in

donations needed to triple the size of the old chapel and include religious symbols of significance to people of all the major faiths in the community. The sanctuary is now a space that can either be shared or separated by sliding glass doors, so that people can worship separately and together at the same time.

“This space was meant to be a uniting space,” said Dr. Michael Geheb, executive vice president of physician planning and operations for Oakwood Healthcare. Geheb was the hospital president when the expansion project was under way and executive sponsor of capital campaign.

“We needed a space where we could all come together,” Geheb said. “It is a testament to Oakwood’s value of diversity, being a place where all faith traditions are respected and cherished.”

The sanctuary was completed in 2011.

“It was a community effort,” said the Rev. Tony Marshall, staff chaplain coordinator for the Oakwood Hospital & Medical Center. Marshall, a former president of the Dearborn Area Ministerial Association, said the sanctuary was a symbol of the larger community.

“We think it’s important to embrace our cultural and religious diversity,” Marshall said. “It’s something that, especially in Dearborn, that city officials and religious leaders are very particular about.”

Since its completion, the sanctuary has become a focal point for visitors, patients and staff alike.

“This room gets a lot of use throughout the day,” Marshall added.

Bulent Kaya, the diplomat correspondent from Ankara, said he was impressed by the sanctuary as well as the commitment to diversity he saw at the hospital.

“It is a beautiful space,” he said, adding that it was the largest he’d seen. “These things are very important. It is good to see.”