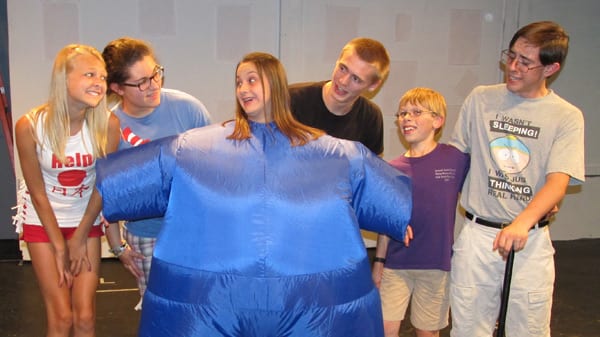 Photo by Sue Suchyta
Violet turns blue as Dearborn resident Maddie Kaplan (third from left), 13, as Violet Beauregarde, rehearses a scene from the Roald Dahl musical “Willy Wonka Jr.” The show runs July 20 to 22 and 27 to 29 at the Players Guild of Dearborn. For more information, go to www.playersguildofdearborn.org. Others Guildlings in the scene include Jade Reynolds (left), 13, of Oxford, as Veruca Salt, and Dearborn residents Maria Viscomi, 13, as Mrs. Beauregarde, Michael Suchyta, 16, as Grandpa Joe, Peter Moore, 10, as Charlie Buckett and Nathan Booth, 16, as Willy Wonka.

By SUE SUCHYTA
Take a trip around the world this year on a year-long journey with the Players Guild of Dearborn during its upcoming 85th season.

Prepare for your travels with a trip to the concession stand – otherwise you will be hungry as you start your world tour with a visit to Willy Wonka and his amazing chocolate factory.

For tickets, call 313-561-TKTS or go to www.playersguildofdearborn.org.

Tickets are $5 with open seating.

The musical, based on the Roald Dahl book “Charlie and the Chocolate Factory” features lyrics and music by Leslie Bricusse and Anthony Newley.

The score features the familiar songs, “The Candy Man,” “Pure Imagination,” “Oompa Loompa” and “I Want It Now.”

JOIN A TRANSYLVANIAN TRANSPLANT IN ENGLAND
Whether or not you are a fan of the creatures of the night, you will not want to miss “Dracula,” the Guild’s next stop in England, where a visit from a Transylvanian transplant coincides with suspicious events. Based on Bram Stoker’s “Dracula,” Dr. Van Helsing attempts to confront the evil threatening Lucy Steward.

NEXT STOP: EGYPTIAN KINGS AND CANAAN NIGHTS
Go to Canaan and Egypt next with “Joseph and the Amazing Technicolor Dreamcoat” for the popular musical retelling of the Old Testament story.

Set to music by Andrew Lloyd Webber, with lyrics by Tim Rice, Joseph ends up in Egypt, where his talent for interpreting dreams leads him to a life he never imaged.

With a wide range of music and high-energy dance numbers, you will enjoy the colorfulness and enthusiasm of “Joseph and the Amazing Technicolor Dreamcoat.”

BACK TO THE PRESENT: ‘FIRST THINGS FIRST’
After musical time travel in ancient Egypt, head back to the present day to see “First Things First,” a modern day man dealing with more than one wife: his situation was much more complicated than Jacob’s was, even with fewer wives.

When a man’s first wife, whom he believed died in a climbing accident in Tibet, comes back to life, trouble and hilarity ensue as he tries to decide how to break the news to his second and current wife. Throw in his twice best man, his first wife’s French friend and a powerful mother-in-law and you have a fast-paced farce.

MORE TIME TRAVEL FOR RETURN ENGAGEMENTS
Playwright Bernard Slade, who brought us “Same Time, Next Year” and “Romantic Comedy” brings along his famous time machine for the next leg of our journey to “Return Engagements.”

We watch the lives of three couples unfold for better or worse at the beginning of their relationships and 20, 25 and 30 years later to see how their lives unwind and intertwine. The couples include a tipsy actress and an amorous bellboy, a Polish World War II survivor and the carpenter she chooses to father her baby, and a columnist and a psychotherapist who are in a rocky relationship.

BACK TO THE PAST TO SWEDEN
“Send in the Clowns” as we travel back in time and across an ocean to Sweden for the Sondheim musical “A Little Night Music.” Set in a country estate in turn-of-the-century Sweden, the musical is a sumptuous celebration of love as marriage partners, mistresses and secret loves lead to unexpected liaisons and in some cases, long-denied love.

Call 313-561-TKTS for tickets or more information, or go to www.playersguildofdearborn.org.