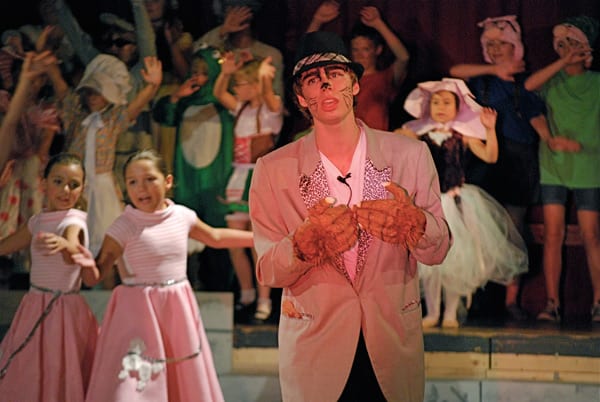 Photo by Cynthia Frabutt
The Big Bad Wolf, played by Kyle Tillman of Dearborn, sings “Have Mercy on Me” to the jury (the audience) for an innocent verdict in “The Big Bad Musical, A Howling Courtroom Comedy.” Performances for the Dearborn Heights Civic Theatre summer youth production are at 2:30 p.m. July 15 and 7:30 p.m. July 20 and 21. For more information, go to www.dhctstage.org.

By SUE SUCHYTA
Summer is near its midpoint, and local theaters are ready to raise the curtain on a wide range of shows. From youth productions to teen show to family favorites, get ready to see the “original 3-D movie” – or as we like to call it, live theater.

HEIGHTS PRESENTS ‘THE BIG BAD MUSICAL’
The Dearborn Heights Civic Theatre and a stage full of fairytale folk will put the Big Bad Wolf on trial during “The Big Bad Musical – A Howling Courtroom Comedy.”

The show, which features a book by Alec Strum and music and lyrics by Bill Francoeur, will be performed by the summer youth theater contingent, with 57 children and teens in the cast.

Director Cynthia Frabutt of Dearborn said the show is a comedy with a large cast. Some cast members are on the stage for the first time and play favorite fairytale characters.

Many Dearborn High School students are in the cast who were in either last summer’s DHCT production of “Really Rosie” or “The Female Odd Couple” at DHS, Frabutt said.

“The Big Bad Musical” is shorter than last summer’s “Really Rosie,” Frabutt said, and she is double casting many of the principal roles.

Westley Montgomery, 17, of Dearborn, plays one of the double cast roles, a shepherd who testifies against the Big Bad Wolf, who is on trial throughout the play. Montgomery, who is a senior at Dearborn High School, said adults will enjoy the humor.

“The whole concept of a Big Bad Wolf being on trial is funny and the concept is geared toward adults in one way but the kids will love it because of the storybook characters that they all know,” Montgomery said.

The Evil Stepmother and the Fairy Goodmother have lines with a lot of humor that adults will appreciate, he said.

Each audience member will vote as a juror to determine the outcome of the trial, Montgomery said, and the cast must be prepared to deliver one of three different endings at any given performance.

Montgomery said the song and dance numbers range from big company numbers, to the wolf and his backup dancers, to solo numbers.

For more information, go to www.dhctonstage.org.

‘RENT’S’ RAW ENERGY ROCKS CORNER PLAYHOUSE
Southgate Community Players’ “Rent” cast was still struggling with a few rough edges during final dress rehearsal Thursday, but the show has so much emotion and edgy energy packed into it that it’s sure to create a stir Downriver and hopefully pack the corner playhouse with the audiences it deserves.

The Tony and Pulitzer prize-winning musical “Rent,” which opened Friday, runs for one more weekend, July 20 and 21 at the Corner Playhouse, 12671 Dix-Toledo Road in Southgate. For tickets or more information, call 734-282-4727 or go to www.scponstage.com.

Jonathan Larson’s rock musical, based on Puccini’s “La Boheme,” follows a year in the life of struggling and penniless artists and musicians in New York’s Lower East Side in the earlier 1990s in the shadow of the HIV/AIDS epidemic.

From the title song “Rent” to the well-known “Seasons of Love,” the show has an urgency and gritty appeal that draws in its audience. It grabs one with its immediacy and compelling story in a way that explains the show’s popularity: it is about surviving during uncertain times and the importance of friends. Both provide reasons to fight to do more than exist, and to go beyond that to find the joy of the moment, one day at a time.

Lucas Ramon, 18, of Dearborn, plays Angel with a maturity beyond his years. A recent graduate of Edsel Ford High School, he does an outstanding job with the difficult role of a petite yet big-hearted young drag queen dying of AIDS.

Nick Rapson, 22, of Canton Township, portrays Tom Collins with a quiet yet intense devotion to Angel as the two try to find hope in an environment where it is hard to find.

Ypsilanti resident Andy Burt, 31, as Mark, narrates the show with his movie camera, which serves as the expression of his art, the group’s protest, and ultimately challenges him to decide how purely he will serve his remarkable talent.

Burt’s duet, “Tango Maureen,” with Southgate resident Lara Keathley, 31, who plays Joanne, is filled with humor and light irony, making us aware that exes and current partners recognize the same dysfunctions in their shared significant others.

Southgate resident Rian McDonald, 27, as Roger, sparks flames with Ypsilanti resident Holly Knick, 22, as Mimi, which literally begins with “Light My Candle” when the building the squatters occupy on Christmas Eve loses both heat and power. Knick pushes her character to the edge of earthy sexuality without turning her into a cheap cliché. McDonald wrestles with demons as well, which adds to the relationship’s turbulence.

Amy Bos, 29, of Detroit, has fun with the rich girl self-centeredness of ever-indulged bisexual Maureen, who dumped Mark for Joanne but who still expects both to cater to her emotionally delivered demands.

Taylor resident Joseph Williams, 20, as Benny, plays their former roommate turned landlord with quiet dignity and a sense of self-deprecation, quietly using his financial good fortune to help his friends even when he is simplistically painted as a bad guy.

The strong ensemble makes the show memorable, and the company vocal numbers are strong and intense.