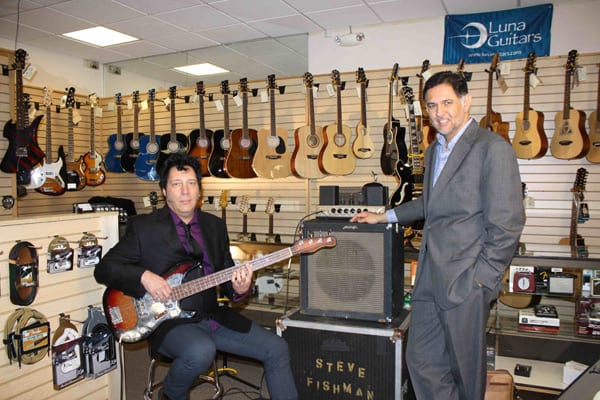 The PBS television show “History Detectives” (WTVS Channel 56 in Detroit) is solving its latest mystery that landed the show’s staff in Dearborn for their 10th season premiere to find out if an amplifier belonged to legendary Motown bass player James Jamerson. The episode will air at 8 p.m. July 24.

If authentic, the amplifier may be showcased at The Rock and Roll Hall of Fame. The museum wants to display the amplifier but only if “History Detectives” host Eduardo Pagán and his investigators can prove Jamerson owned the amplifier, according to a press release.

Pagán and his “History Detectives” team came to metropolitan Detroit earlier this winter speaking with musically-inclined locals such as Jamerson’s son, James Jamerson Jr., and others, including Hewitt’s Music Store Owner Tim Hewitt.

Hewitt said the investigators brought an amplifier to the store and wanted to know if the amplifier sold at Hewitt’s Music, 13936 Michigan Ave., belonged to Jamerson.

Hewitt said the amplifier was the same model that his father sold to Jamerson.

“I couldn’t tell if the amplifier was the same exact one,” Hewitt said. “But that is the same amp (version) we sold to James Jamerson in the 1960s.”

The amplifier, an Ampeg B-15, is the same model that Jamerson played during Motown’s heyday in Detroit.

Jamerson, who battled alcoholism, died of pneumonia in 1983 at 47 and was described by Motown founder Berry Gordy Jr. as “a genius on the bass and incredible improviser in the studio,” according to rockhall.com.

Jamerson gained fame with his role in Motown’s in-house backup band, the Funk Brothers, and played on Motown songs such as “Reach Out I’ll Be There,” by the Four Tops, “Dancing in the Street,” by Martha and the Vandellas, “I Was Made to Love Her,” by Stevie Wonder and “You Can’t Hurry Love,” by the Supremes.

Paul McCartney said Jamerson influenced his own playing, according to a 1995 interview with “Bass Guitar” magazine.

The Rock and Roll Hall of Fame inducted Jamerson in 2000.

Pagán said the amplifier, which possibly belonged to Jamerson, was originally discovered by a friend of series contributor Steve Fishman.

Fishman has played bass with the likes of McCartney and Flea of the Red Hot Chili Peppers, according to a press release.

Fishman discovered a beat-up Ampeg B-15 with the name “James Jamerson” stenciled on the side, after his friend found it in a garage in Los Angeles, according to the release.

“Steve had his eye on it for a while,” Pagán said in a phone interview.

Pagán added that Fishman’s friend was willing to sell the amplifier to him and that is where the “History Detectives” journey became more interesting.

Pagan brought on board an amplifier expert who found critical evidence that dates the amplifier.

Not everything lined up neatly though, while investigating the authenticity of the amplifier there were a few bumps in the road, Pagán said.

Jamerson’s son, a renowned bass player, who often sat at his father’s side in the recording studio, was a bit uncertain of the amplifier’s authenticity, he said.

“When we last met with James Jamerson Jr. he was still not entirely convinced himself,” Pagán said. “Given that (Dennis Coffey) said, ‘I know this amp,’ I’m confident as we can be.”

In Pagán’s eyes, he said, Jamerson lived like a Motown bass king.

“He founded the modern bass sound,” Pagán said. “He was a pioneer in electric bass, transforming sound from simple rhythm to one that jumped and moved. He was the guy who transformed electronic bass into something signifcant in rock music.”