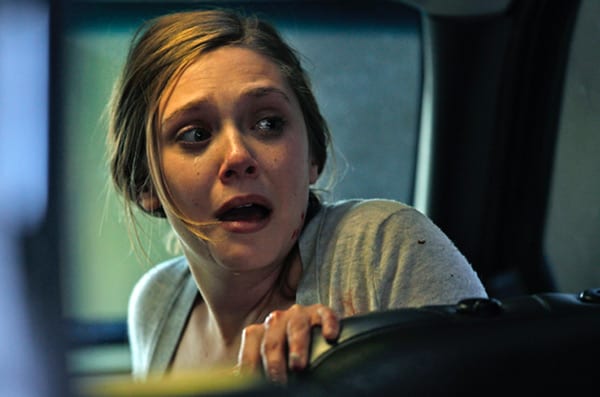 PICKS OF THE WEEK
“Silent House” (R) — What could be a more boring, safe, non-terrorizing experience than cleaning out an old lake house? How about a lake house that hasn’t been used in years, and has had every possible entry and exit nailed shut? This remake of a low-budget flick from Argentina puts Sarah (the ascending Elizabeth Olsen) in just such a creaky old home, trapped, in the dark, all alone except for the shadowy figures lurking just out of sight.

The whole movie is in real-time, seemingly done in a single shot that follows Sarah. No convenient intermissions, no scene transitions or alternate locations, just the audience trapped along with the victim. Those aching for terror and suspense can rent a room down at Silent House, where you can’t scream or the bad people will find you.

“The Deep Blue Sea” (R) — This tragic and romantic film tells the story of Hester (Rachel Weisz), a woman trapped in a loveless marriage and powerless to stop her passionate romance with another man. All beautifully shot in the rich tones of post-war London, the movie hands Weisz a serious role, and she hands back a serious performance.

Hester’s husband is a stuffy, wealthy old judge who supplies her with a life in the upper-crust, and not much else. Hester’s other man is Freddie (Tom Hiddleston, Loki from “The Avengers”), a veteran pilot from the war now looking for work. You may not like Hester, but you will feel something for her as she swims in a sea of passion and conflict.

“Jiro Dreams of Sushi” (PG) — You don’t have to be a fan of sushi to get the appeal of this unique documentary. Jiro Ono is revered as the best sushi chef in the world, and a national treasure to the Japanese. He also works in a tiny restaurant in a subway station where people make reservations months in advance to see the master at work. The film is an engaging portrait of a modern ascetic, somebody who’s dedicated to a singular craft. It also shows the complicated relationship between the 85-year-old Jiro and his oldest son, Yoshikazu, who is expected to fill his father’s shoes one day.

“My Way” (R) — This war epic from Korea follows two young men from their rivalry as marathon runners to the battlefields of Mongolia and all the way to beaches of Normandy. One is a native-born Korean, the other is part of the Japanese occupation. When World War II swallows them both, they seem bound together as they go from soldiers, to prisoners to conscripts.