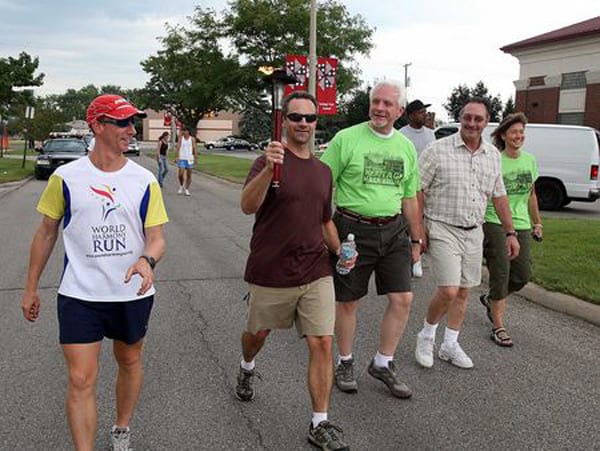 By JAMES MITCHELL
Sunday Times Newspapers
SOUTHGATE — By any name, the city’s Heritage Days weekend offers a little something for everyone. Runners, music fans, crafts shoppers and the little kid inside everyone will find plenty to enjoy Friday and Saturday.

Mayor Joseph Kuspa said that recent expansions made to the event continues in 2012 with new attractions and the return of old friends.

The World Harmony Torch Run — a global relay promoting international friendships that included Southgate on its 2010 map — will return to Heritage Days, and participate in Friday night’s 8-kilometer run and Saturday morning’s parade.

Kuspa said the introduction of running events two years ago broadened the scope of the community festival.

Given the community history origins of Heritage Days, Kuspa said this year’s attractions includes an open invitation to graduates of the city’s four high schools.

“It’s all classes, all schools,” Kuspa said. A display of high school photos and yearbooks will be set up by the Heritage Foundation to prompt memories.

Also joining the festival this year is a student art exhibit. Co-hosted with the Downriver Council for the Arts, Kuspa said 2012 Anderson High School graduate Nick Danish will display his black-and-white renderings of vintage horror films; the Council will show art films and conduct children’s art workshops during the festival.

Activities will be held at the Southgate Municipal Complex, 14400 Dix-Toledo. Now in its 38th year, the weekend festival was briefly called Founder’s Day until a revived Heritage Days spirit took hold in 2010 with new running events, fireworks and other events.

For runners, the half-eight and Mayor’s Walk/Kid’s Dash (one mile) kick off at 6:30 p.m. Friday. A portion of the proceeds benefit the Guidance Center in Southgate. Registration begins at 5 p.m., and the event is followed by an awards ceremony and live music.

Saturday festivities include the annual parade, which starts at 11 a.m. at St. Pius Catholic Church, 14101 Superior St. and ends at the Civic Center.

Attendees can browse the arts and crafts fair, check out vintage wheels at the classic car show, and sample their way through “Taste of the Town,” presenting dishes from local restaurants and caterers.

A poker tent will also be open to adults 21 and over, hosted by Southgate Rotary. The younger crowd can bounce around an inflatable playscape or join the Kid-O-Lympics games.

Throughout the event live music provides the backbeat, beginning with a 7 p.m. Friday night performance by Fifty Amp Fuse; Saturday’s lineup includes Little Davey & the Diplomats at 12:30 p.m.; Boogie Dynomite at 6 p.m.; and the Mega 80s from 9 p.m. to midnight.

At dusk on Saturday, fireworks for the whole family will bring the Heritage Days celebration to an end.

For more information on Heritage Days or to register for the running events, visit www.southgatemi.org.