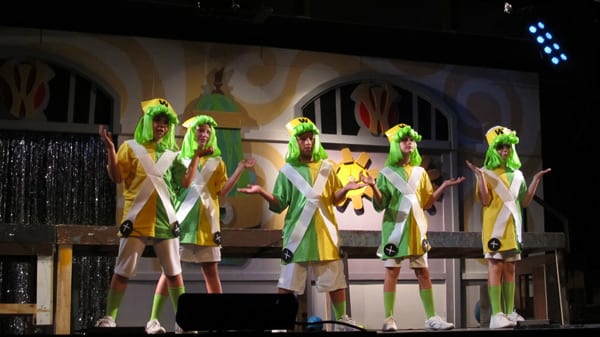 Photo by Sue Suchyta
Dearborn 10-year-olds Molly Boudreau (left), Macenzie Landon, Xavier Krause, and Angel Krawczyk, with Cole Haas, 10, of Inkster, rehearse a scene from the Roald Dahl musical “Willy Wonka Junior” at the Players Guild of Dearborn. The show finishes its two-weekend run with performances Friday through Sunday at the Guild Theater. For more information, go to www.playersguildofdearborn.org.

By SUE SUCHYTA
Whether you want to visit the ocean, take in the sights or just be entertained, summer fun is as close as your local community theater. Southgate Community Players offer a choice of mermaids or murder, while the Buckets will capture your heart with their positive attitude in a chocolate-coated tale at the Players Guild of Dearborn.

The cast includes Chris Rollet of Southgate as RayBud/Bud, Domingo Guzman of Melvindale as Junior, Trenton resident Jema McCardell as Raynelle and Brigette Clements of Flat Rock as Suzanne.

Lincoln Park residents in the cast include Joy Zouzaneas as Nadine and Delightful, Karen Ciferno as Veda, Kelly Klug as Lucille and Liza Boos as Juanita.

Wyandotte cast members include Marie Olson as Marguerite, Patrick Reed as Royce and Peter Carpenter as the Reverend Hooker.

‘MERMAIDS’ SIGHTINGS DOWNRIVER
From Downriver and under the sea comes the tale of Ariel, as Southgate Community Players present “The Little Mermaid Jr.”

Ariel, a mermaid who longs to see the world above the waves, defies her father, King Triton and strike a bargain with the evil sea witch Ursula to meet an earthly prince on dry land.

CHOCOLATE DREAMS: ‘WILLY WONKA JR.’ IS DELICIOUS
If you’re looking for a family-friendly sweet treat, search no further than the Players Guild of Dearborn, where the Roald Dahl inspired musical “Willy Wonka Junior” will run at 7:30 p.m. through the last two weekends in July.

For more information, call 313-561-TKTS or go to www.playersguildofdearborn.org.
Bright and clever costumes, brought to life by Diane Kaplan, highlight the production and provide a colorful crowd of Oompa-Loompas and Candyman kids.

Her Johnny Depp-inspired Willy Wonka attire is resplendent, from the purple velvety coat to the dark pageboy wig.

The Oompa-Loompas and squirrels steal scenes when they aren’t moving them on and off stage. Their singing, dancing and responsiveness are fun to watch, and their antics will leave your laughing.

Kudos go out to Christie Schauder for her clever choreography.

Younger audience members may reassure their parents that there is plenty of humor for them.

The dysfunctional behavior of certain poorly behaved Golden Ticket winners will leave parents reassured that their children’s behavior is sterling in comparison.

The character actors are magnificent as well. Directed by Valerie Haas, the show features a talented cast of 63 local children.

Dearborn resident Nathaniel Booth plays a delightfully earnest and offbeat Willy Wonka in the tradition of Depp, with enough sarcasm and irony in his comments to be amusing and entertaining.

Charlie Bucket and Grandpa Joe, played by Dearborn residents Peter Moore and Michael Suchyta, respectively, make a great team. Moore’s voice is incredibly pure and on pitch, and he captures the earnest innocence and honesty of the youngest Bucket.

Kevin Talanges is a fine Candy Man with a wonderful singing voice. Lia Bertucci is amusing as the doting German mother of Augustus Gloop.

The femme fatales, Violet and Veruca, played respectively by Maddie Kaplan and Jade Reynolds, take center stage with their over the top personalities and delightfully bratty and spoiled interpretations of the roles.

Hats off to the parents of the cast for bring the chocolate factory to life, and to co-producers Greg Viscomi and Tim Carney for their stage magic.

Musical director Carmelle Adkins brought the young voices into pleasing, energetic accord, bringing forth tunes that will keep audiences humming the songs long after the final curtain.

Tickets are $5, with open seating. For more information, call 313-561-TKTS or go to www.playersguildofdearborn.org.