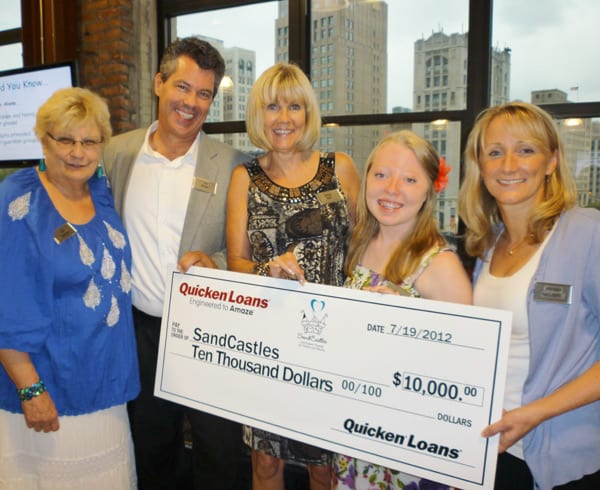 Photo by Evelyn Cairns
Pictured with a facsimile of a check for $10,000 donated to SandCastles by Quicken Loans are Jim Ziraldo (second from left) of Quicken Loans; Jill Nestman (left) of Trenton; Carole Bell of the Josephine Ford Cancer Center in Brownstown; Casey Papp of Brownstown; and Peggy Nielsen, manager of the SandCastles program. The check was presented to the organization July 19 at a fundraising reception attended by more than 100 guests at the newly remodeled historic Madison Building in Detroit.

By Evelyn Cairns
A highlight of the SandCastles “Get to Know Us” fundraiser July 19 at the historic Madison Building in Detroit was the presentation of a $10,000 check for the organization’s children’s bereavement program by Quicken Loans.

Participating in the presentation ceremony was Casey Papp, 12, of Brownstown, who has been attending SandCastles grief-counseling sessions since the death of her mother from cancer two-and-a-half years ago.

Casey gave a talk about how the Downriver SandCastles program has helped her cope with losing her mother, who was treated at the Josephine Ford Cancer Center in Brownstown.

After spending a year in the Josephine Ford bereavement-counseling program, Casey transferred to the Downiver SandCastles program, which is held at the Guidance Center Aquinas Building in Southgate.

Committee chairmen for the fundraiser, attended by more than 100 people, included Carole Bell, marketing and service manager at Josephine Ford, and Jill Nestman of Trenton.

The event, hosted by Quicken Loans, offered a spectacular view of Detroit from the fifth floor and rooftop entertainment area of the stunningly remodeled [email protected] Building, a tasting of fine wines, a wide variety of Mediterranean and Mexican specialties and Coney dogs.

The Downriver SandCastles program is one of eight located throughout the metropolitan Detroit area. The centers serve children 3 to 18 years old and their families who have lost love ones.

Children are divided into groups and participate in age- appropriate counseling and activities twice a month while older family members meet separately.

This is no charge for the program or for a SandCastles camp held every summer. Neither receives government funds, and both are supported entirely by public donations and grants.

Additional information about SandCastles, which serves more than 450 children and adults, is available by going to www.aboutsandcastles.org or calling 313-874-6881.

Allen Park fair slated
Allen Park is gearing up for its 31st annual Street Art Fair, to be held from 10 a.m. to 11 p.m. Aug. 3 and 4 on Allen Road between Roosevelt and Southfield.

In addition to scores of juried artists’ booths, the event will feature 20 bands, a “Coming Home” reunion of Allen Park former classmates and friends and a wide variety of food vendors. For additional information, go to www.allenparkstreetfair.org.

Jazz on River concerts set
The 17th Annual Jazz on the River concerts are scheduled for 1 to 7:30 p.m. Aug. 4 and 5 at Elizabeth Park in Trenton under the auspices of Wayne County Parks.

Appearing on Aug. 5 will be Larry Lee and Back in the Day featuring Kiko, the Kimmie Horne Show, Dave McMurry, Pieces of a Dream and Kirk Whalum.

Zonjic is music director of the concerts.

There is no charge for attendance, but a $5 do-nation is suggested for parking. Free parking will be available in Downtown Trenton, with free shuttle transportation available to the entrance of the park from Jefferson and West Road, and from Jefferson and Elm. The park is located off Jefferson.

In addition to featuring the Mustangs, the event will showcase the Sea Harrier F/A2 and the F-86 Sa-bre “Smokey.”

Gates will open at 9 a.m. daily. Tickets in advance are $25 per adult (children 15 and younger are free) and parking will cost $5 per vehicle until noon Aug. 5. At the gate, tickets will be $30 per adult, and parking $10. For questions or additional information, go to www.yankeeairmuseum.org/airshow.