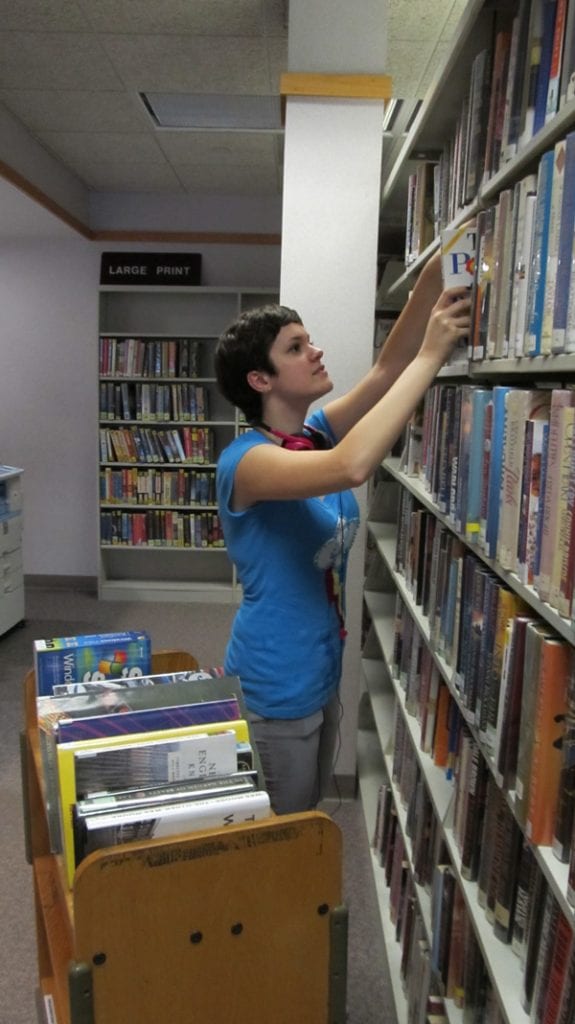 Photo by Sue Suchyta
Samantha Lugari, 17, of Peoria, Ariz., reshelves books at the Riverview Public Library, where she volunteers weekly. The Michigan native spends her summer in Riverview with her grandparents, Lynn and Diana Labadie.

By SUE SUCHYTA
Sunday Times Newspapers
RIVERVIEW – Talking in a library is generally frowned upon, but for Riverview Community Library’s teen volunteers, the friendships they have found there have kept them coming back.

“My favorite part is just how friendly the people are,” Samantha Lugari, 17, said. “I’m kind of awkward around new people but here… they just embraced me and they’re so nice to me all the time… and make you feel really appreciated.”

Lugari, a Michigan native now living in Peoria, Ariz., spends her summers in Riverview with her grandparents, Lynn and Diana Labadie.

A self-professed bookworm, she said volunteering at a library, which she also does during the school year in Arizona, comes naturally to her.

“It gets me out of the house and… I really like libraries,” Lugari said. “It’s an environment of learning and books.”

A fan of Matthew Skelton’s “Endymion Spring” and J.K. Rowling’s “Harry Potter” series, Lugari said the library’s wide selection of books and its sense of community make it great.

“It seems like a very involved place in the community,” Lugari said. “These people really make sure that they’re reaching out to the community and just making it enjoyable for everyone.”

Volunteer Stephanie Scals, 18, of Riverview, also enjoys the friends she has made as a volunteer member of the Teen Advisory Group, a five-to-ten member group of teens who plan and carry out activities for younger teen library patrons.

“I really enjoy working with kids,” Scals said. “It gives me a chance to help out and I love books. Why else come to a library?”

Scals ranked a recent ghost and zombie scavenger hunt brainstormed and carried out by the teen volunteers as her favorite TAG-planned activity.

“There were four groups of kids and they all had to run around the library and outside of the library tracking down clues for a scavenger hunt,” Scals said. “It was really fun to see all of them do that.”

Melissa Blair, 16, of Riverview has also found friendship at the library while volunteering with TAG.

“My friend actually got me into it… I started to come and I just felt loved here,” Blair said. “I felt like I could get along with everybody that I met.”

She said TAG gives her a way to talk at the library while they plan fun activities to encourage teens to come to the library.

“I like getting to know everyone,” Blair said. “I’m more of a ‘talk to people’ person.”

Korey Thomas, 17, of Riverview, said he likes to spend time on Facebook and playing games on the computer at the library in addition to volunteering with TAG. He said he remembers taking part in library programs like TAG plans when he was younger.

Library assistant Whitney Jones, of Wyandotte, likes to see the teens get excited about the library activities planned by the TAG volunteers.

“I think it’s great,” Jones said. “If a kid comes in to the library for whatever reason, be it reading a book or participating in whatever event, it’s just so nice to see them be excited about it.”

The Riverview Community Library is located at 14300 Sibley between Fort Street and Allen Road. For more information about programs and volunteering, call (734) 283-1250 or go to www.riverviewpubliclibrary.com.