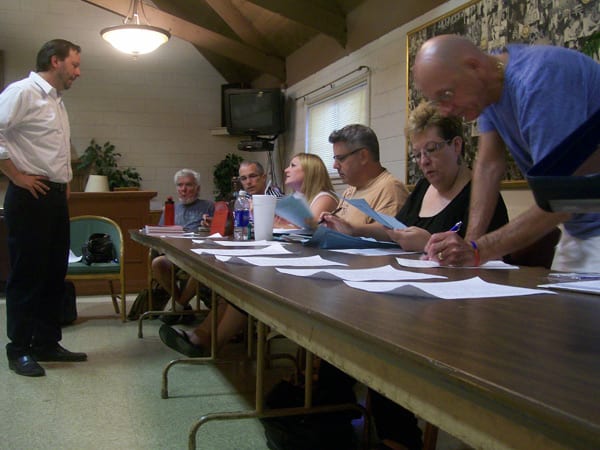 Photo by Kori Bielaniec
Tom Varitek (left) of Dearborn, who was cast in the title role in “Dracula,” approaches the casting committee during auditions July 23 at the Players Guild of Dearborn. Members shown include Tom Sparrow (second from right) of Allen Park, director Paul Bruce of Dearborn, Tiffany Mullins of Livonia, Alan Ellias of Farmington Hills, Frann Stempek of Taylor and casting governor Bob Jones of Dearborn. The show opens Sept. 14 for a three-weekend run at the Guild theater. For more information, call 313-561-TKTS or go to www.playersguildofdearborn.org.

By SUE SUCHYTA
Despite long days and summer sunshine, the Players Guild of Dearborn has turned its attention to the dark side as it announced the cast for “Dracula,” its season-opening show, July 24 on the Guild website.

The thriller stage play by Hamilton Deane and John Balderston debuted on Broadway in 1927 – the same year the Players Guild of Dearborn produced its first play 85 years ago. Although the play is based on the Bram Stoker novel, its characterizations and plot twists vary from the original novel.

When Lucy Seward becomes mysteriously ill, specialist Dr. Van Helsing suspects she is the victim of a vampire. When Transylvania Count Dracula’s arrival in England coincides with the onset of dark and mysterious events, suspicions lead to him.

Others in the cast include Mike Moseley of Allen Park as Van Helsing, Ken Kilgore of Dearborn as Harker (Lucy’s fiancé), Jeff Flannery of Southgate as Dr. Seward (Lucy’s father) and Aric Liljegren of Dearborn as Renfield, an asylum patient.

“I am fortunate to have an extraordinary cast of eight people who I know are going to breathe new life into this 85 year old show,” director Paul Bruce of Dearborn said. “We thought it fitting to put the two 85th anniversary entities together.”

Bruce has also designed the set.

The show’s producers are Tim Carney and Kevin Rider, who is also the assistant to the director.

Jeff Bartos is costuming the show, with Anne Suchyta designing and creating original costumes for some of the leads. Mary Ann Denyer will chair props with the producers.

“We are pulling out all the stops in terms of special effects to make this horror thriller piece as exciting as possible,” Bruce said.

He added that Mike Kinnell and James Mayne have committed to creating and overseeing the sound, light and special effects for the show.

“Before there was ‘Twilight’ there was ‘Dracula,’” Bruce said. “See the show that put vampires into the public psyche first.”

MARY POPPINS FLIES INTO FISHER
If vampires are too scary for your tastes, Mary Poppins will fly into town with her musical magic Oct. 23 to 28 at the Fisher Theater, 3011W. Grand Blvd. in Detroit.

Tickets are available through Ticketmaster, at 800-982-2787, or online at www.ticketmaster.com, www.broadwayindetroit.com, and at the Fisher Theatre box office.

The musical “Mary Poppins” stage play is a co-production of Disney and Cameron Mackintosh.

The stage play features the Academy Award-winning music and lyrics of Richard M. Sherman and Robert B. Sherman.

WATERWORKS THEATRE COMPANY PRESENTS ‘SHAKESPEARE IN THE PARK’
The Water works Theatre Company launches its 12th season of Shakespeare in the Park Aug. 2 to 12, with three productions at Jaycee Park in Royal Oak.

Patrons should take lawn chairs and dress for the weather.

Frannie Shepherd-Bates will lead a Water Works Academy July 30 to Aug. 3 for high school teens, with a KidAct! Workshop held Aug. 6 to 11 for children of elementary and middle school age.

For more information, go to www.waterworkstheatre.com.