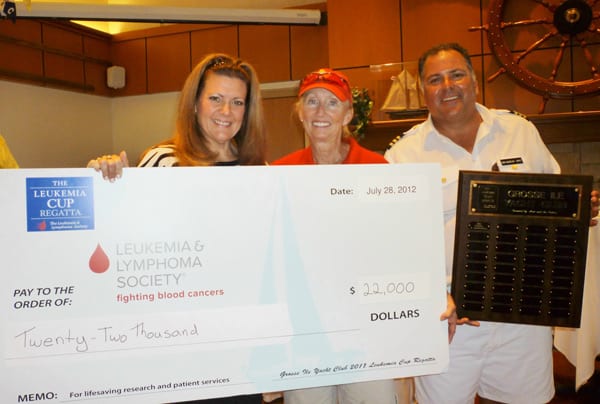 Holding a facsimile of a check for $22,000, the amount raised July 28 at the Grosse Ile Yacht Club’s second annual Leukemia & Lymphoma Society Downriver Leukemia Cup Regatta, are society executive director Peggy Shriver (left) and regatta chairman Katie Hartwell. The regatta’s honored hero, Ken Muscat, vice commander of the GIYC, displays a perpetual plaque to which the race winner’s name will be added. A member of the Dearborn Police Department, Muscat is an 11-year survivor of non-Hodgkin’s lymphoma.

By Evelyn Cairns
The second annual Leukemia & Lymphoma Society Downriver Leukemia Cup Regatta, hosted by the Grosse Ile Yacht Club July 28, raised $22,000 in honor of the club’s vice commodore, Ken Muscat, who has been in remission of a blood cancer for the last 11 years.

Muscat is a sergeant with the Dearborn Police Department and the skipper of the Catmando, which captured third place in the regatta.

Nineteen sailboats raced from the Detroit Yacht Club down the Detroit River to the Grosse Ile Yacht Club, where the skippers and their crews were welcomed and cheered.

The sailors, club members, guests and L&LS supporters sipped rum-based beverages courtesy of Mount Gay Rum, one of the national sponsors of the race, and chowed down at a bountiful buffet that included shrimp, fish, chicken, hush puppies, corn on the cob and desserts.

Live and silent auctions, music by the David Gerald Blues Band and an awards program followed the buffet.

Muscat spoke to the audience about the remission of his blood cancer (non-Hodgkin’s lymphoma) as the result of treatment with the drug Rituxin, which was developed through research funded by the Leukemia & Lymphoma Society.

The Grosse Ile Yacht Club is one of three clubs in contention for the coveted Leukemia Cup, which will be presented during a ceremony in October to the yacht club that raises the most funds for the L&LS in the 2012 regattas.

The Great Lakes Yacht Club, winner of the 2011 Leukemia Cup challenge, held its regatta May 19, and the Port Huron Yacht Club race is scheduled for Sept. 2.

His new single, “Boogie Ooogie Ooogie,” from his new album, “90 Degrees at Midnight,” has achieved No. 13 on the Groove Jazz Music Chart and ranks in the Top 30 on Billboard charts.

Scott has won two gold records, two platinum records and a multi-platinum record for his work on a Gospel Wow compilation CD and recordings with Granny Award winner Kirk Franklin.

He also is a three-time winner of the nationally televised “It’s Showtime at the Apollo” and a $10,000 winner of the Hennesy Jazz Search.

Appearing with Scott will be Jazz pianist Demetrius “Krayon” Nabors.

The fund, dedicated to the station and the men and women who served there, features photos and stories from the 1920s through the following 40 years.