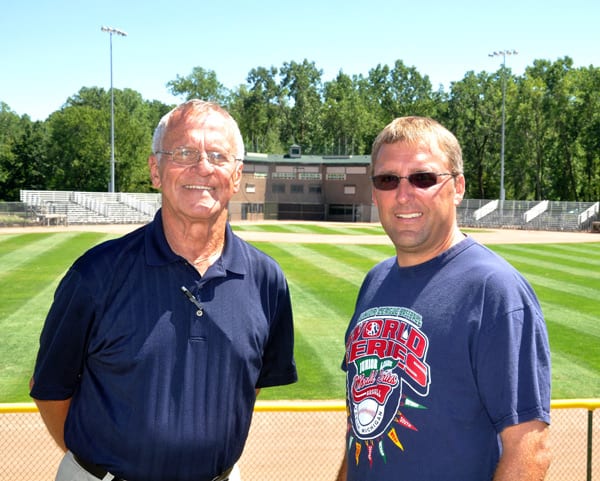 Boys of summer return to Taylor
Photo by Dave Gorgon
Greg Bzura (left) and son Dan, shown at the 2011 Junior League World Series, celebrate 30-plus years of family involvement. Greg first became active in Junior League baseball when the oldest of his three sons began playing, and has served as program director since.

By JAMES MITCHELL
Sunday Times Newspapers
TAYLOR — It was the usual story.

Greg Bzura said his involvement in a local Little League baseball team came hand-in-hand with being father to an 8-year-old ready to swing a bat.

The pattern repeated itself as each of Bzura’s three sons took their turn at the plate, first in Little League play before helping redefine those in-between years before high school competition.

Less typical is that Bzura kept going long after his sons no longer played. When tournament play begins today at Heritage Park for the 32nd annual Junior League World Series, Bzura will again serve as director of the tournament he helped shape.

“When my oldest son turned 8, that’s when I joined Little League,” Bzura said. “Three sons, three years apart, kept me in it for about nine years.”

Bzura was among the organizers in the early days and asked to host the first tournament of U.S. players, when teams from four regions came to town.

“Greg’s lived this since day one,” Gorgon said. “He’s the founder and longest single director of any of the eight World Series under Little League International.”

At the time, Bzura thought the event would be a one-time affair.

“We were tickled to death in 1981 that we pulled it off,” Bzura said. “We only had four teams. Then we thought, ‘Can we do it again?’ It’s been one year at a time for 32 years. I have a hard time believing it myself.”

The Junior League began as an experimental program for 13-year-old players too old for Little League but not yet ready for high school. Bzura said the Taylor South Little League program was already running with teams for that age bracket, and the growing interest from around the country — and world— inspired Taylor players and coaches to see where it could lead.

“We were doing it that way anyway and knew it would be successful,” Bzura said. “When we heard about it we said, ‘We want to be its home base.’”

The 1981 tournament laid a foundation, and steady growth through the years added Puerto Rico to the roster in 1982, Canada in 1988 and by the year 2000 the competition began hosting European, Latin American and Middle Eastern players.

Six teams qualified for this week’s tournament by press time: A Thunder Bay, Ontario, team will represent Canada; a Chinese Tapai squad for the Asia-Pacific region; an Italian team on behalf of Europe; the Las Peuntas Little League champs from Mexico; and from Latin America a team from Aruba.

United States regional competition will bring champs from Rockledge, Fla., from the Southeast; Corpus Christi, Texas, from the Southwest; the Manhattan Beach, Calif., Little League from the West; Franklin Square, N.Y. from the East; and North Canton, Ohio from the Central region.

Festivities began yestetday with opening ceremonies and a Parade of Champions at Heritage Park, 12111 Pardee Road. Tournament play begins today at noon and runs through the championship game Saturday, which annually is broadcast live on ESPN.

“If you think it’s a good thing and you like doing it, then by golly do it,” Bzura said. “I was married to one woman for 43 years, had one employer for more than 30 years, and lived in the same house. Everything I just described I’m very happy with; not happy about being a widower, but my boys are still part of the program.”

It’s a typical story, of boys playing first Little League, then Junior League, perhaps becoming coaches and — in time — sending their own kids for that first at bat. Some even bring grandchildren to suit up for the game.

One year at a time, Bzura said as he prepared for the 32nd start to a week of basbeball. How long he will continue remains, as always, a question.

“Someone’s gotta take our place,” Bzura said. “Just not yet.”

For information and schedules, go to www.cityoftaylor.com/jlwsschedule.