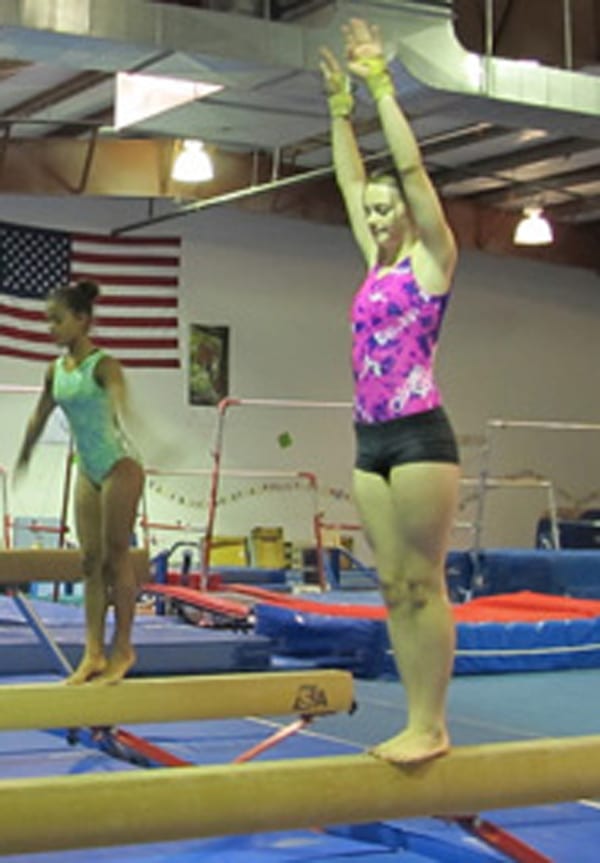 Photo by Sue Suchyta
Gymnast Logan Cook (left), 10, of Wyandotte and Gemini Roe, 14, of Taylor practice moves on the balance beam at Downriver Gymnastics in Riverview.

By SUE SUCHYTA
Sunday Times Newspapers
RIVERVIEW – Every fourth summer, sedentary television viewing inspires children to take a leap of faith and enroll in a fun and challenging sport – one that isn’t wrestling for the remote control.

“There’s always an upsurge – huge – about a 25 percent in our enrollment the year after the Olympics,” Kelli Cook, owner of Downriver Gymnastics in Riverview and Starz Gymnastics and Cheer in Dearborn, said. “It’s fun. Who doesn’t love to run and hop and swing and bounce?”

Wendy Schirrick, office receptionist at Downriver Gymnastics, said that at least half of the children who enroll in gymnastics because of the Olympic coverage of the sport stay enrolled for more than a year. She added that 20 to 25 percent of the Olympic year enrollees stick with the sport for multiple years. She said children normally do not quit after one session. Those who do drop gymnastics generally do so because of a conflict with other interests like dance, soccer or cheer.

Lanny Mills, owner of Mills Gymnastics in Southgate, said he typically sees an 8 to 10 percent bump in enrollment after the Olympics. When the U.S. gymnastics teams do well, enrollment is even higher.

Mills said this summer they enrolled 500 children in their fall gymnastics programs, a figure they usually don’t achieve until the first week of September.

The television networks rarely cover gymnastics outside of the Olympics, Cook said.

“For gymnastics… world championships (occur) every other year; national championships once a year,” she said. “It’s not like basketball where you see it all the time… and it’s kids that do (gymnastics). Some of these sports you have Olympians that are in their 30s, 40s and 50s. Gymnastics you don’t – they’re teenagers. So I think kids can relate even more to it.”

Both Cook and Mills agree that most children will apply their gymnastic skills successfully to other sports and aspects of life, since becoming an Olympian is rare.

Jordyn Weiber, 17, from Dewitt, a member of the current gold medal-winning U.S. women’s gymnastics team, is the first woman Olympic gymnast from Michigan.

However, despite the long odds, young gymnasts at Downriver Gymnastics said they draw inspiration from the Olympic gymnasts.

Layla Gibson, 5, of Ecorse, enrolled in a gymnastics gym stars class at Downriver Gymnastics after seeing television coverage of the Olympic gymnasts.

Gemini Roe, 14, of Taylor, who competes with a team from Downriver Gymnastics, said she enjoyed watching the Olympics.

“We’ve had quite a few African-American kids in our gym (in Southgate) already, especially compared to population, especially on the boys’ side,” Mills said. “I’m sure they feel very comfortable in our gym.”

Feeling comfortable and being with friends is important to Emma Barry, 11, of Allen Park, who is a competitive gymnast at Downriver Gymnastics. She also likes spending time with her mother, Stephanie Barry, a gymnastics coach and team program leader at the facility.

Emma Barry, who started gymnastics training when she was 18 months old, also studies dance at Haja Dance Academy in Monroe.

“It’s just an experience to be able to do what other kids may not be able to do,” she said, explaining that friends outside of gymnastics frequently ask her to demonstrate gymnastic stunts.

Nicole Lasich, 13, of Trenton, a competitive gymnast at Downriver Gymnastics, said she also started gymnastics at an early age, attending her first class when she was two or three years old.

She said in addition to gymnastics being an outlet for her energy, it is a way for her to learn new life skills.

Kelli Cook agreed that learning life skills is an important aspect of gymnastics.

“We just don’t teach gymnastics here, we teach children, and our avenue to teaching children is through gymnastics,” she said. “They learn to overcome challenges, and… accept defeat.”

Mills agrees that an important aspect of a gymnastics program is building confident kids. He said his files are full of letters from parents who have seen gymnastics build confidence in their shy, introverted children.

“We’re teaching (our team) kids twisting double backs… but if I’m out there and I have a kid that’s struggling to do a cartwheel, just struggling, and that kid finally gets the cartwheel, that’s as big a thrill as a kid that I have right now that’s on a full ride at Michigan for gymnastics,” Mills said.

Most of his gymnastics students go on to play other competitive sports, Mills said, and their training at his gym makes them better in whatever sport they choose.

“It doesn’t matter if it’s a ball and stick team sport, (or) if it’s an individual sport like swimming, wrestling, track and field,” Mills said. “We’ve got testimonials… (from) coaches… saying ‘the best kid on my team trained at your gym.’”

He said both his competitive and recreational gymnastic students acquire positive character traits from training in gymnastics that stay with them their whole life.

Cook said that during the school year she finds news clippings about former students who have successfully transitions to other sports. She said gymnasts are often the best hurdlers, divers, wrestlers and cheerleaders.

“(Gymnastics) translates into any sport because it’s that strength, agility (and) flexibility that goes into these sports,” she said.