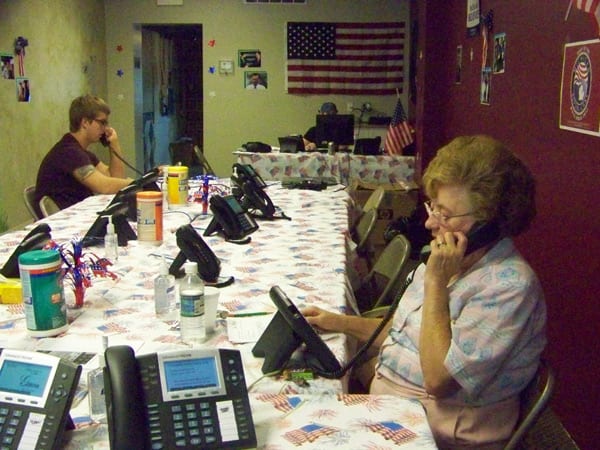 By SHERRI KOLADE
Times-Herald Newspapers
DEARBORN — Volunteers and supporters in a newly-opened Republican campaign office want to give the Democratic campaign a run for its money in the city and in the White House.

“There are plenty of Victory Centers across the state,” Frendewey said. “It speaks to the importance that we think (the cities) will play this fall in the election.”

Oakland County also has more than one Victory Center; Bloomfield Hills, Royal Oak and Lake Orion each have a campaign office within the county.

Frendewey said any Republican candidates, including local candidates, can drop off their literature at the campaign office and in return receive support from Republican Party supporters.

“The (volunteers) make calls to help elect Mitt Romney and they work hard to elect others on the ballot,” Frendewey said.

He added that during the week it is a little slow because the volunteers usually have to work at their other jobs.

There are about 20 phones manned by volunteers and the office gets pretty busy on the evenings and weekends, Frendewey said.

Frendewey said by having a blue collar conservative base in areas such as western Wayne County, including Dearborn, disenfranchised voters can vote in a new direction.

“We have folks who have been hammered by an economy and voted for the president four years ago and have been hurt by him,” Frendewey said. “(They) want another option and are looking for bold leadership and that is what we have for them.”

The Dearborn Victory Center hours are 9 a.m. to 9 p.m. Monday to Saturday.