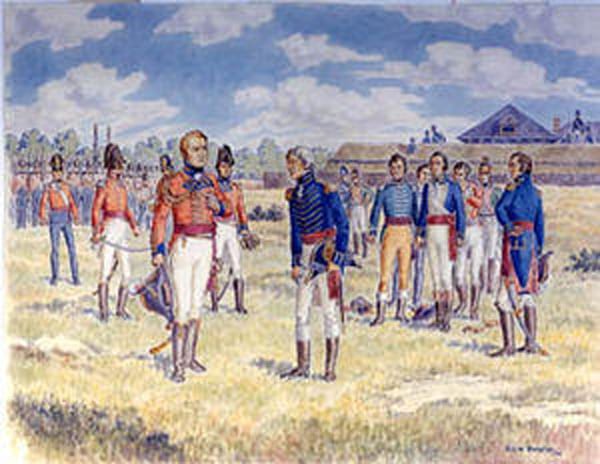 The War of 1812: Its impact on Dearborn, state border lines

By SHERRI KOLADE
Times-Herald Newspapers
DEARBORN — Two hundred years ago a war between the United States and the British raged on in the southeastern territory of what was then called Fort Detroit, in the United States’ attempt to protect their rising sea trade success from British invasion. But not everybody in the settlement near the fort (in what is now Dearborn) was satisfied with the final results.

“It was a situation that had come to a head,” Olson said. “A lot of people after the American Revolution — from 1775 to 1783 — felt it was dumb luck that the United States was able to free itself from England, establish a country and start trading with the world and the British were extremely jealous of the trade — that was cutting into their profits — that Americans were conducting with Europe and around the world.”

Olson said that jealously fueled British military personnel to hijack ships on the sea before the War of 1812.

“That added to the reasons that the United States declared war on England, for hijacking ships,” Olson said.

Olson added that if a ship was hijacked and those on board could not prove their English ancestry, they were forcibly taken and made to work on the British ships.

Attacks also came from France’s side in an attempt to restrict America’s commercial activity, according to the War Genealogy of 1812, but because the British ruled sea lanes, British efforts garnered more attention.
A response from the Americans would have been imminent, Olson said.

“If we had not responded, eventually it would have gotten to the point where it was such a big mess that the United States probably wouldn’t have ended up surviving,” Olson said. “When it comes to a point where somebody’s transgressing and it is going to affect your survival, you are ready to respond. You either surrender or you fight for your rights and see who comes out on top.”

After an arduous fight, Gen. William Hull on Aug. 16, 1812 surrendered Detroit to the British, who were the victors during the nearly three-year war — for about 13 months — until the American re-occupation of Detroit on Sept. 29, 1813.

One of the United States’ goals in the war was to invade and conquer Canada, according to the book “The War of 1812 Genealogy.”

Subsequently, the U.S.–Canadian border saw a major chunk of the war, including land and water. The war also took place in the area of New Orleans and the surrounding area of Chesapeake Bay, because of the British wanted to claim and takeover United States centers, according to “The War of 1812 Genealogy.”

During one of the attempted British takeovers on Sept. 14, 1814, at Fort McHenry in Baltimore, 35-year-old Francis Scott Key penned a poem-turned-song that became famously known as “The Star- Spangled Banner,” the U.S. national anthem.

“(Key) was captured and on a British ship and he had no communication from the United States and its military,” Olson said. “The flash of the exploding shells and the rockets would light the American flag up on top of the Fort and all night long the flag stayed there and never came down. And that is what triggered Key’s writing of the song.”

About 7.7 million people made up the United States and Michigan Territory, now known as Michigan, including many ribbon farms along the Rouge River.

Olson said Dearborn was not a city during 1812, rather it was a territory just starting to develop with a few farms and settlers in the area.

Olson said a lot of settlers in Detroit planted themselves along the Detroit River, which was the main method of transportation.

“By the War of 1812, Monroe and Detroit were two fairly prominent settlements,” Olson said. “There were scattered farm houses along the river but not too many (people) lived in Dearborn. Most of them stayed closer to the river, the river being the primary transportation mode and supply of water in Detroit and this area.”

“The war was the end of the American Revolution and really established the international boundaries between what was becoming the United States and what was left over of Great Britain,” Gnau said.

Gnau added that there were a handful of United States’ citizens who did not want to become American — and while some lived in Dearborn, that changed very quickly.

“They wanted to remain loyal to the king (George III),” Gnau said. “So when the Rouge River and Detroit River froze over about a dozen or so residents moved their houses and immigrated to the Canadian side.”

Gnau added that a lot of people didn’t get excited enough to care to move to Canada because they were more concerned about their safety.

In the end, after the guns were tucked away and the soldiers returned home, a renewed sense of national pride spread throughout the United States, according to “The War of 1812 Genealogy.”

But the war shouldn’t be the main focus, Olson said.

Olson said learning the story behind an artifact can lead one closer to heart of its story.

“Every object has that story but unfortunately many times they get lost,” Olson said. “We don’t want to lose what we have so far.”