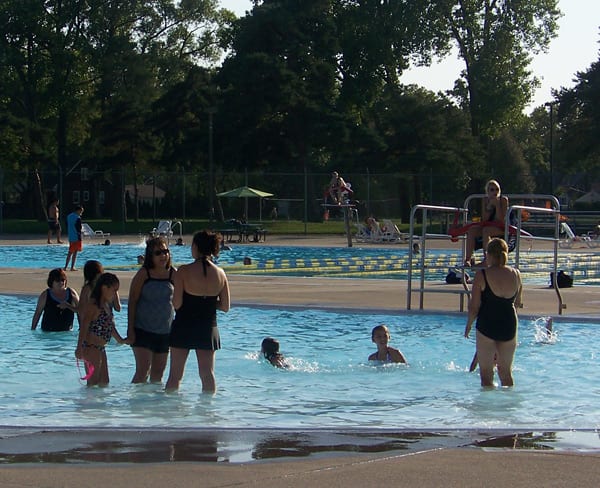 By SHERRI KOLADE
Times-Herald Newspapers
DEARBORN — As a child Dan Kerry, 50, chipped his front right tooth — a memory that he cherishes because of where it happened.

The lifelong Dearborn resident practically used Levagood Park’s pool, then called Seashore Pool, as his second home — a place he chipped his tooth while going down a water slide.

“It was great,” Kerry said during the pool’s 70th anniversary event Thursday. “We lived here in this pool, it was unbelievable.”

Kerry, who brought his family to the celebration, said while growing up he skinned his knees and toes all summer because of the pool’s rough surface — but he didn’t mind — and he had to prove to lifeguards that he didn’t have athlete’s foot by spreading his toes for lifeguards.

Kerry started off playing in the pool as an infant.

About 300 people attended the anniversary event hosted by the Dearborn Recreation and Parks Department, which included free swimming, concert, refreshments and music.

Old and young alike attended the event; many played in the water, enjoyed a hot dog or sunbathed after putting on globs of sunscreen.

According to a city press release, in 1940, local officials chose the 40-acre site near Cherry Hill and Telegraph roads as the first city outdoor pool.

Originally dedicated in 1942 as Seashore Pool, it had a sand beach and Olympic size swimming pool.

It was upgraded in 1948 and the sand beaches were replaced.

In 1988 the Levagood Park pool was renamed the Jack Dunworth Memorial Pool Complex in honor of Dearborn High School’s swim coach and teacher Jack Dunworth, also co-founder of the Dearborn Dolphins swim team, according to the press release.

Dearborn resident Elizabeth Schmidt came out to the event and did what she has done for the entire summer: swim.

“It is convenient,” Schmidt said. “You can either walk, ride your bike or drive your car to the pool. It is lovely.”

Schmidt said she has lived in Dearborn with her family for more than 35 years.

“We moved here primarily because of the schools,” Schmidt said. “The schools were good, then we discovered that they had pools, which was very nice because that means that kids had a place to go play.”

Schmidt said her children all learned how to swim at the Levagood Park pool.

“We spent a lot of time here,” Schmidt said. “It was one of those very positive features. Also it brought the community together.”

Lifeguard Lars Johnson said this summer is his sixth year working at the pool.

“I really appreciate the sense of inclusion at Dunworth Pool,” Johnson said. “I fell in love with the place because it is big.”

Johnson said he also appreciates the sense of history at the pool.

“I hear a lot of veterans call it ‘Seashore,’” Johnson said. “I hear their stories and it is a cool thing to be a part of.”